A quirky ice cream recipe which embraces the humble ingredient of breadcrumbs. The brown sourdough ice cream is lifted with a swirl of raspberry ripple. Brown bread ice cream is an old English recipe, and another example of how a genuinely humble ingredient – breadcrumbs – can be elevated to something extraordinary. Here we up the ante by using sourdough breadcrumbs and introducing a ribbon of raspberry ripple. There’s a touch of cinnamon here, too. Raspberries and cinnamon are a match made in heaven – something the French know only too well. It’s not a combination you find often in Britain, where we tend to pair cinnamon with more autumnal fruits. But think again: cinnamon and raspberry make the world’s most beautiful couple. The warmth of the spice plays beautifully off the tartness of the fruit. To preserve the almost electric pink of the fresh berries when making the raspberry ripple, it’s crucial to avoid over-heating them. The technique we use here leaves their colour brilliantly intact. You’ll need to begin this recipe the day before you want to serve it.

First, make the caramelised breadcrumbs. Preheat the oven to 180°C/gas mark 4. Blitz the sourdough in a food processor to create fine, but not powdery, crumbs. Empty the breadcrumbs into a mixing bowl.

Melt the butter over a low heat in a small saucepan, taking off the heat as soon as it’s liquid – don’t let it foam. Stir in the brown sugar, salt, cinnamon and brandy then pour this all over the breadcrumbs and stir well so that all the breadcrumbs are moistened with the butter.

Line a baking sheet with baking paper and spread the buttered crumbs evenly over it. Toast for 25-25 minutes, stirring occasionally so they brown evenly, then remove from the oven – they will dry and crisp as they cool. These are going to be churned into the ice cream, so they need to be really crisp at this stage to hold their crunch later. When ready, set aside to cool.

Make the custard base: heat the milk and double cream in a saucepan over a medium heat until they reach boiling point.

In a separate bowl, whisk the egg yolks with the caster sugar until well combined. Slowly pour the boiling cream mixture onto the yolks and sugar, whisking all the time, then return the mixture to the saucepan. Stir constantly over a low heat until the custard has thickened. Do not let it boil or it will catch on the bottom of the pan or scramble. To test if it’s thick enough, coat the back of your wooden spoon with the custard and run your finger through it. If the line you draw stays visible for a second or two, you’re there.

As soon as the custard is ready, pour it into a clean bowl and sit this bowl inside a larger container full of iced water. Stir in half the toasted breadcrumb mixture, leave to cool to room temperature, then cover and chill overnight.

To make the raspberry ripple, put the berries and caster sugar in a glass or metal bowl set over a saucepan of water, taking care that the water does not touch the base of the bowl. Place over a medium heat and bring to a constant simmer. The steam will heat the berries and sugar in the bowl above, liquefying the sugar and beginning to sweat the fruit. You should be left with a pink sugar syrup in which the fruit, still intact, will swim. Immediately remove from the heat and blitz very briefly in a food processor to break down the fruit, then strain through a fine sieve to get rid of the pips. Leave to cool to room temperature, then cover and chill overnight.

When you’re ready to freeze your ice cream, stir the remaining breadcrumbs into the custard and churn in your ice cream maker according to the manufacturer’s instructions. Meanwhile, freeze a large glass or plastic bowl.

Take the well-chilled bowl out of the freezer and spoon the ice cream into it. Drizzle over the raspberry ripple in generous swathes, then take a large spoon and, swiftly and deftly, fold it through using two or three figure-of-eight motions. Do not under any circumstances over-mix or you’ll lose the ripple effect – stop before you think you need to. Spoon the ice cream into a lidded container and freeze. This is best eaten within three days of making. 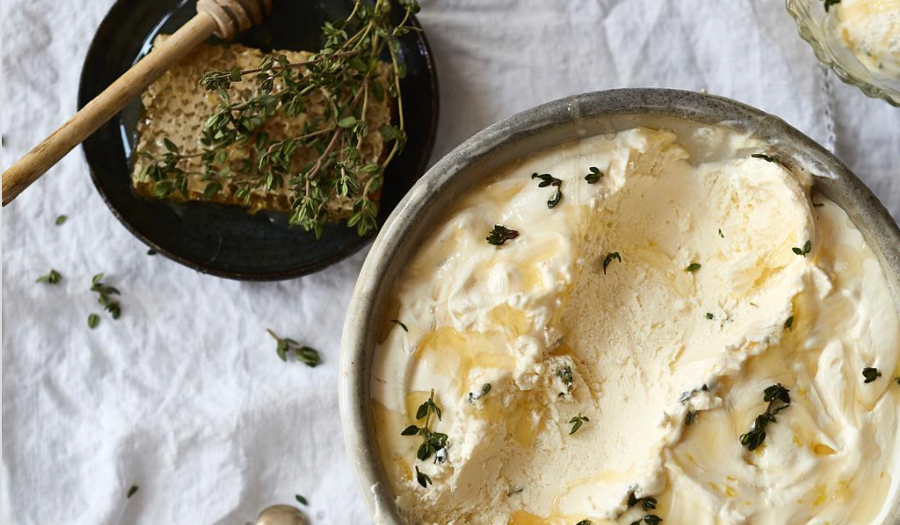