Alternatives to turkey this Christmas: game birds and chicken While most of us can get on board with a traditional Christmas turkey, if you have fewer guests to cater for or are worried about food waste, this might be the year to try something new and opt for a bird with smaller proportions. There are so many alternatives you can choose from for a special Christmas centrepiece, particularly if you’re catering for a smaller crowd. Guinea fowl, pheasant, duck and quail – even a good old roast chicken will do the job. Here we’re sharing general guidance on cooking game birds and chicken, plus a selection of recipes to try.

1. Game birds, like pheasant and guinea fowl, are in season from September or October through to January or February, so Christmas is a good time to enjoy them. Whether you’re cooking game or chicken, look out for well-reared, free-ranging birds. They are available in most supermarkets.

2. Some birds come with the giblets. Check inside the bird if they do, and remove them before cooking. Use giblets to make stock or gravy.

3. Don’t let it dry out! Birds have a tendancy to dry out when overcooked – from quail to chicken, their varying sizes mean that cooking times will vary widely too. Be sure to follow instructions carefully.

4. Basting during the cooking process will help keep the meat moist. Tilt the tin and use a spoon to scoop up some of the juices and drizzle it over.

4. Leave to rest after cooking, covered with tin foil and a couple of tea towels so it stays warm. If you’re swapping the big family meal for a romantic dinner for two this Christmas, you can’t do much better than Ainsley Harriott’s brightly flavoured dish of succulent duck and tangy pomegranate. This recipe feeds two. by Claudia Roden
from Med

Inspired by the flavours of Turkey and the Arab world, Claudia Roden’s roast chicken is served on a bed of bulgur pilaf, studded with raisins and chestnuts. A zesty yoghurt sauce lifts an enhances the sweet, spiced flavours of this dish. This recipe serves four to six people. by Claudia Roden
from The Food of Spain

These tiny birds are full of flavour. Claudia Roden pairs them with slow-cooked onions, pan-braised together with brandy until the quail is beautifully tender and the onions deliciously sweet and caramelised. The key here is not to overcook quail – these birds require just 30 to 40 minutes and should still be slightly pink. Feeds two. Guinea fowl has a mild gamey flavour, reminiscent of pheasant. This is a delicious way to serve it, cut into pieces and roasted all in one tray with fennel, pancetta and white wine. One bird feeds two people generously so keep that in mind if you want to scale up this recipe based on how many mouths you have to feed. This recipe feeds four. The Best Roast Chicken Ever

by Harry Eastwood
from The Skinny French Kitchen

“This recipe is what I would call the golden Mercedes of roast chickens”, says Harry Eastwood, and we couldn’t agree more. If you’re going to roast a chicken for Christmas, try this recipe with a wild mushroom stuffing, flavoured with lemon, fresh herbs, lemongrass and garlic. Feeds four. by Mary Berry
from Simple Comforts

Enriched with a tarragon butter and served alongside super soft onions, Mary’s take on a roast chicken has all the special touches your Christmas meal deserves but with none of the stress. by Mary Berry
from Classic

With a delicious, complex flavour, this fatty bird is more able to stand up to robust flavours, like the classic cherry or orange sauces it’s often paired with. Try this cross between Chinese crispy duck and a standard roast duck, with plenty of crisp skin and fall-apart moist and tender meat. Team it with a sweet-savoury port and cherry sauce, and duck-fat roast potatoes. Mary also suggests saving the duck giblets to make to make a flavoursome stock with the duck bones another day. Feeds four to six. 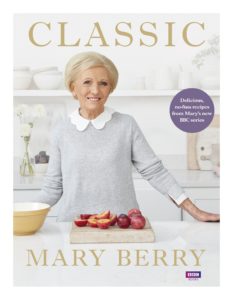 Jamie’s slow-cooked Christmas goose is brimming with festive flavours thanks to the blend of aromatic and warming spices used to coat the bird. Jamie also includes a brilliant get-ahead option for those of looking to prep early for the big day. by Tim Hayward
from Food DIY

“There’s a long historical tradition of show-off feasting dishes made by inserting progressively smaller animals into each other”, says Tim Hayward whose slightly more modest recipe cooks three birds – duck, chicken and pheasant – one inside the other. With a layer of sausage and chestnut stuffing, and a layer of sage stuffing between each bird, this really is a centrepiece to remember. Feeds eight with plenty of leftovers.