by Claudia Roden from Med: A Cookbook Add a new roast to your repertoire with Claudia Roden's comforting chicken, served on a bed of spiced bulgar pilaf and drizzled with zesty yoghurt sauce. When my grandchildren were small, I made regular weekly meals for all the family and it was always roast chicken. It was what the grandchildren wanted and it was easy to put three chickens in the oven together. Bulgur – whole wheat kernels that have been boiled, then dried and ground – is a rural staple in Turkey and the Arab world. You often see it drying on rooftops in the countryside there. With chestnuts, raisins, pine nuts and delicate spices, it makes a sophisticated accompaniment to the chicken.

Rub the chicken with the oil and lemon juice, salt and pepper and push the squeezed half lemon inside the cavity. Lay the chicken, breast-side down, in a baking dish and pour in about 5 tablespoons water. Roast for 1 hour then turn the chicken breast-side up and roast for another 15–20 minutes, until the skin is crisp and brown and the juices run clear when you cut into the bird between the leg and the body with a pointed knife.

While the chicken is in the oven, make the bulgur pilaf: in a large frying pan, fry the onion in the oil over medium heat, with the lid on, for about 20 minutes until brown and caramelised. Stir often and remove the lid towards the end.

At the same time, bring the chicken stock to the boil in a large pan. Stir in the cinnamon, allspice, coriander and some salt (taking into consideration the saltiness of the stock). Stir in the raisins and bulgur and cook over low heat, with the lid on, for about 10 minutes or until the liquid has been absorbed and the grain is tender.  Fold in the butter, and add pepper, and more salt to taste.

Put the pine nuts and chestnuts in the frying pan with the fried onions and cook, stirring, for 2–3 minutes, then mix into the bulgur.

To serve, cut the chicken into pieces and pour the lemony sauce that has formed at the bottom of the baking dish over the chicken and the bulgur. Serve with the yoghurt sauce. From the book: Med: A Cookbook 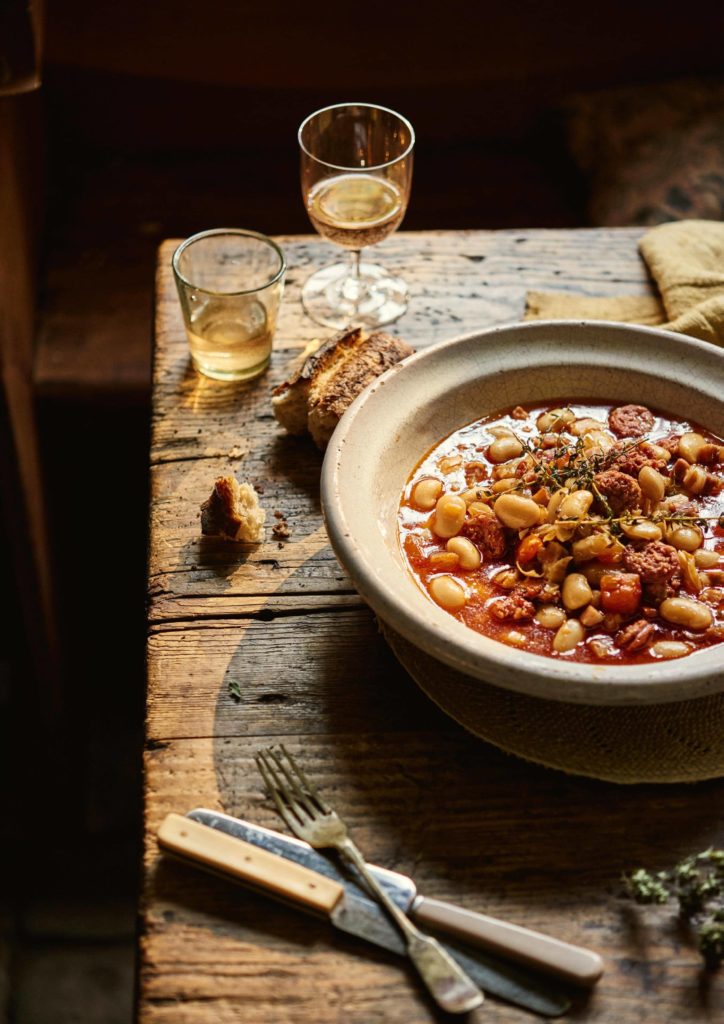