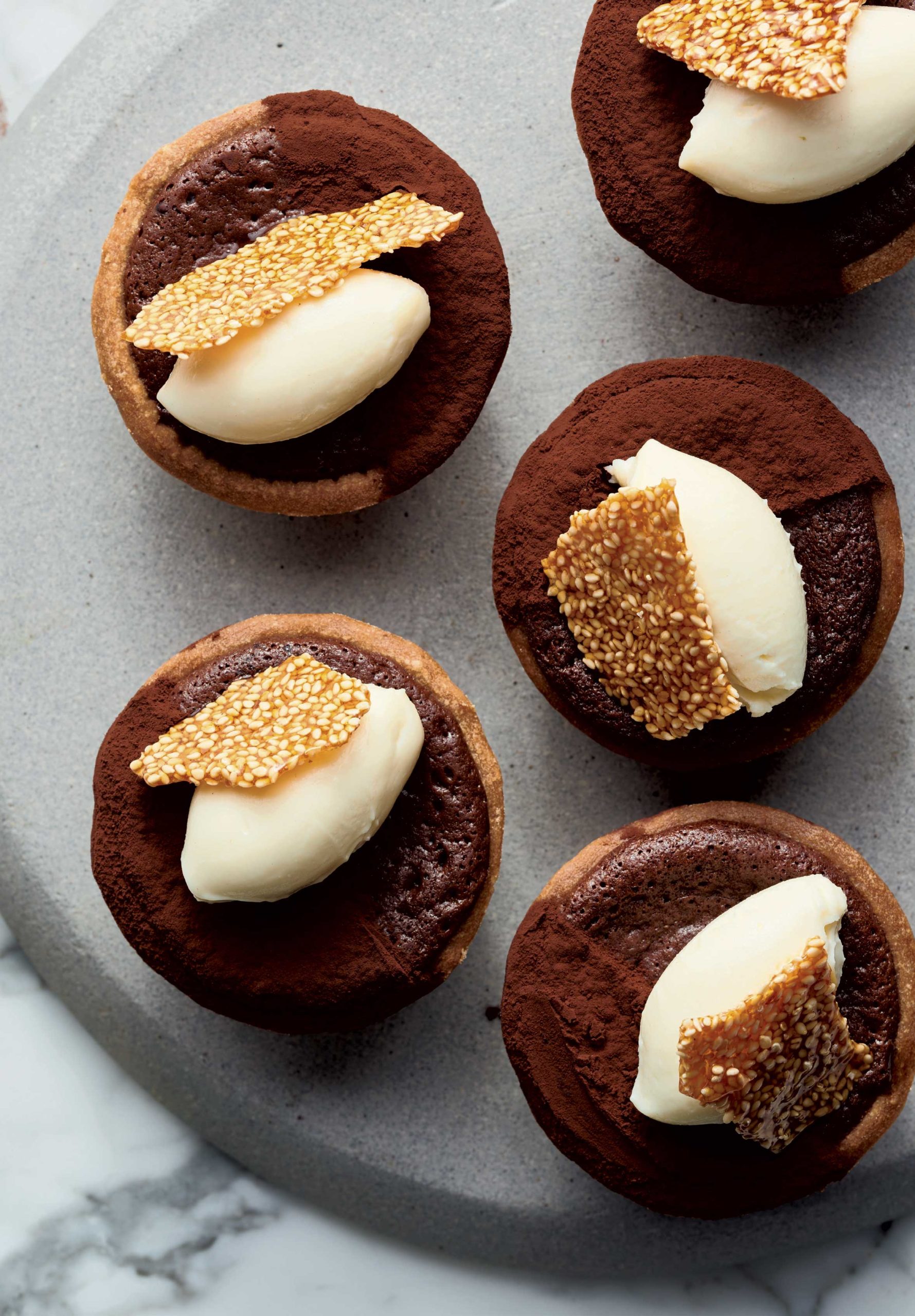 Ottolenghi's decadent mini chocolate tarts can be filled with tahini or marmalade. The perfect dessert to delight dinner party guests. 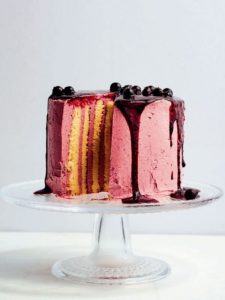 Rather than making one large chocolate tart to serve after a meal, it’s sometimes fun to make lots of individual tarts. Chocolate mousse pairs so well with so many flavours that you can fill the base of these tarts with pretty much anything you like. We’ve given two options here – tahini and the marmalade – but you can play around with fillings: a teaspoon of crumbled halva, mint icing, some chopped nuts, a slice of banana, the brittle used in the large chocolate tart, a teaspoon of jam – they all work well. It’s fun, if serving them as canapés, to have a mix of fillings, so that people have a pop of surprise. If you want to give a clue as to what’s inside, you can do so with the garnish. A shard of Sesame Brittle, see instructions below, works well on top of the tahini tarts, as photographed, or a thin slice of candied orange peel on those with the marmalade filling.

Quantity wise, we’ve made enough of the marmalade filling to fill one whole batch of tarts. If you want to do half and half, you’ll just need to reduce the amount of filling you make.

You will need: a food processor, a regular muffin tin, a 10 or 11cm round cookie cutter and an electric mixer with the whisk attachment in place.

To make the pastry, sift together the flour, icing sugar and salt and place in a food processor. Add the butter and lemon zest and pulse a few times, until the mixture has the consistency of fresh breadcrumbs. Lightly whisk together the egg yolk and water and add this to the mix: the dough will feel quite wet, but this is as it should be. Process once more, just until the dough comes together, then tip on to a clean, lightly floured work surface. Lightly knead the dough into a ball. Wrap loosely in cling film and press gently to form a flattish disc. The dough is very soft, so keep it in the fridge for at least 1 hour (or up to 3 days).

Lightly brush the moulds of a regular muffin tin with the melted butter and dust with flour, tapping away the excess.

When ready to roll out, allow the dough to rest at room temperature for 30 minutes (if it has been in the fridge for more than a few hours) and place on a lightly floured work surface. Tap all over with a rolling pin to soften slightly before rolling out until 2–3mm thick. Using a 10 or 11cm round cookie cutter, cut out twelve circles and gently ease these into the muffin moulds, pressing down to fill the moulds. Re-roll the pastry, if necessary, until you get twelve circles. Refrigerate for at least 1 hour before blind-baking the cases. The remaining third of the dough can be frozen for future use.

Preheat the oven to 180 C/160 C Fan/Gas Mark 4.5 To blind bake the tart cases, line the pastry cases with squares of baking parchment or paper liners. Fill with a layer of rice or dried beans and bake for 20–25 minutes, or until the pastry shells are a light golden brown around the edges.

Remove the parchment paper or liners and the rice or beans and return the pastry to the oven for another 3 minutes. Set the pastry cases aside (still in their tin) to cool down.

To make the chocolate mousse, place the chocolate and butter in a large heatproof bowl over a pan of simmering water, making sure the base of the bowl is not touching the water. Stir occasionally until melted, then remove from the heat and set aside to cool for about 10 minutes.

Place the eggs and sugar in the bowl of an electric mixer with the whisk attachment in place. Whisk on a high speed for at least 10 minutes, until the mixture is extremely pale, thick and foamy and has tripled in volume. Remove the bowl from the machine and, using a large slotted spoon or hand-held whisk, gently fold a third of the mix into the melted chocolate and butter. Gently but thoroughly fold in the rest of the egg-sugar mixture until well combined.

Pipe or spoon the chocolate mixture over the tahini or marmalade filling, right up to and over the rim. Be confident here: you want the mousse to rise up and form a dome shape. Once full, bake for 9–10 minutes, until a crust has formed on top but the centre is still gooey. Set aside to cool completely in the tin – the tarts are too molten to be served warm. When cool, use the tip of a small knife to prise the tarts out of their moulds. Dust lightly with cocoa powder and use two small teaspoons to form ‘quenelles’ of mascarpone to top each tart.

Tips: The pastry will make more than you’ll need. It will keep well in the fridge, wrapped in cling film, for up to 3 days. It also freezes well, wrapped first in cling film and then aluminium foil, for up to 2 months. If freezing the dough, do so in disc form or, if planning to make individual tarts, roll it out and cut it to size so that you’re all set for your next bake.

For the sesame brittle (makes 20 shards or more or less, depending on size):

Spread all the sesame seeds out on a baking tray and toast for 10–15 minutes, stirring halfway through, until golden brown. Keep the seeds warm in a low oven while you make the syrup.

Place the sugar, glucose, butter and salt in a small saucepan over a high heat and stir continuously until the mixture is combined and coming to the boil. Remove from the heat, add the warm sesame seeds and stir through.

Place two of the pieces of baking parchment on a heatproof surface and pour half of the sesame caramel on to each sheet. Cover with the other pieces of parchment paper and use a rolling pin to spread the caramel until 2mm thick.

Place the trays in the oven and bake for 20 minutes, until golden. Remove from the oven and set aside to cool before breaking into shards. 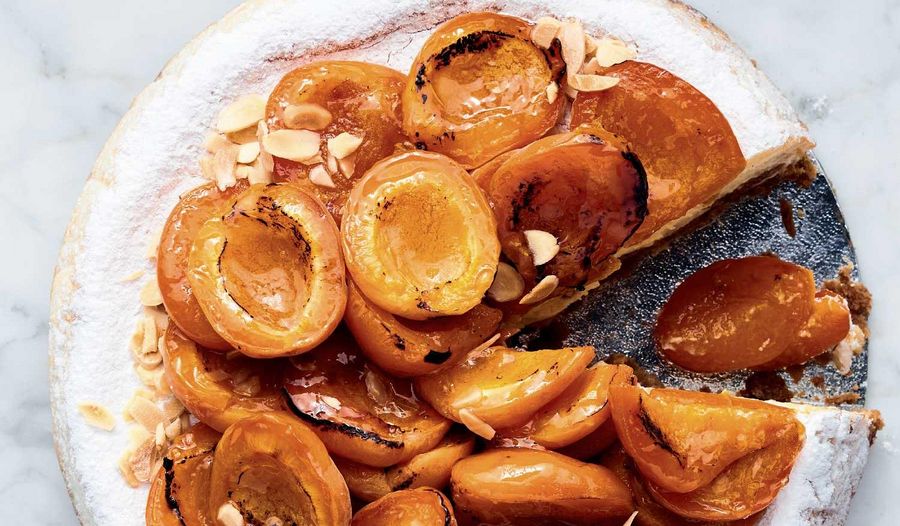 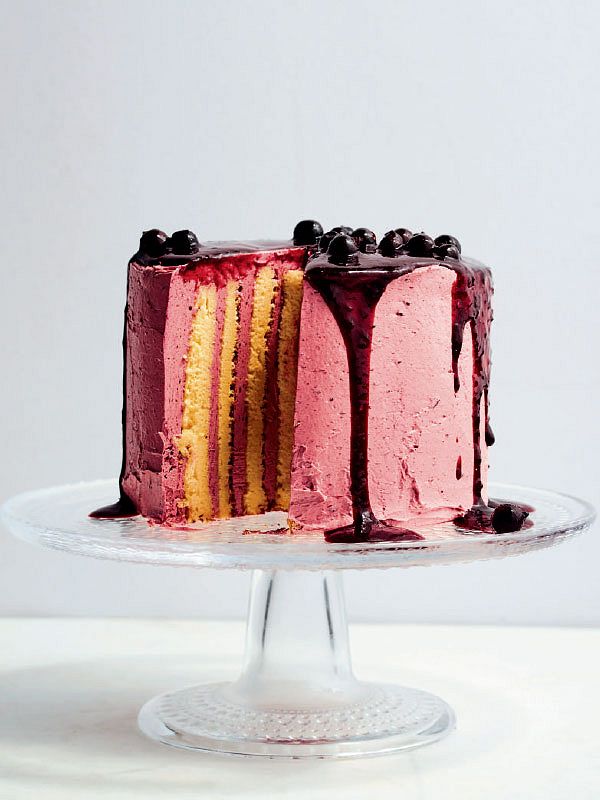