Never suffer from under-cooked eggs again with this fail-safe vegetarian frittata recipe. The dish is served with a vivid watercress pesto and sweet roasted tomatoes. It's the ideal fulfilling mid-week dinner. Cooking a frittata slowly and gently, as you would a quiche, makes perfect sense if you have ever tried cooking one under the grill – as I have – and cut into it only to find an unwelcome layer of runny egg hiding under a beautifully browned top. You won’t have that problem here. Use any almonds you like in the watercress pesto: skin on, blanched or flaked will all do perfectly.

Preheat the oven to 170°C/gas mark 3½. Put the tomatoes on a baking tray, drizzle with a little oil drained from the artichokes, season and put in the oven to roast slowly; they’ll be ready at the same time as the frittata.

Pound or blitz the garlic, chilli flakes and a pinch of salt in a mortar and pestle or the bowl of a mini food processor. Add the almonds and pulverise by hand or machine until roughly chopped. Reserving a handful of the prettiest watercress sprigs for later, add the rest of 1 bunch of watercress to the pestle or food processor bowl. Again, pound or blitz, adding enough extra virgin olive oil to loosen. (You may need as much as 200ml to get the pesto running freely, but start at about 120ml.) Stir in half the grated cheese and check the seasoning, using a little lemon juice to brighten, if you like.

In a large, heavy-based frying pan (ideally 25cm in diameter), cook the sliced onion in 2 tbsp more drained artichoke oil with a pinch of salt for 10 minutes, keeping the heat low so it only browns lightly as it softens. Lightly whisk the eggs with the remaining cheese and some salt and pepper in a mixing bowl.

Increase the heat under the onion pan. Add the artichokes and remaining watercress, stirring over the heat for 30 seconds to wilt the greens. Pour in the egg mixture and cook for a further 30 seconds. Slide the pan into the oven and cook for 25–30 minutes, until the eggs are just set and the tomatoes look a bit shrivelled (they will have had about 1 hour).

Serve the frittata with a squeeze of lemon juice and a drizzle of your cold-pressed oil, the roast tomatoes, watercress pesto and reserved watercress sprigs. More Recipes from The New Vegetarian 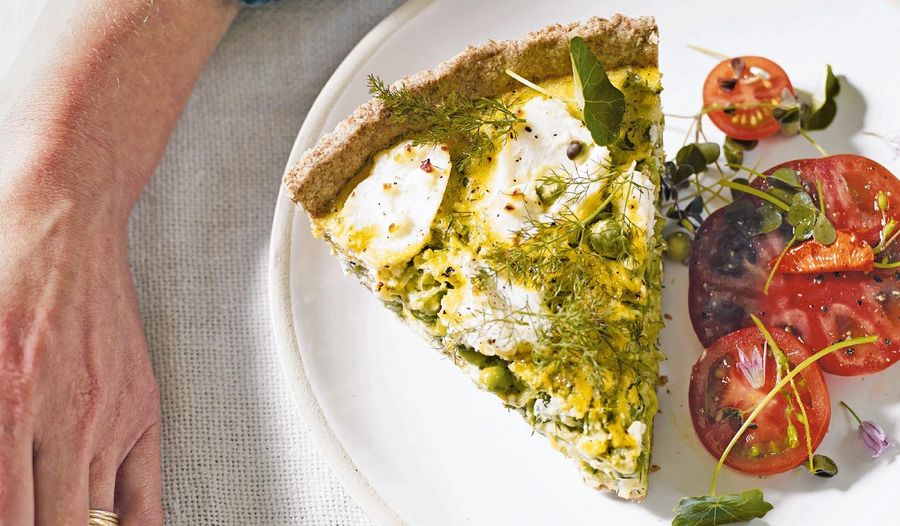 From the book: The New Vegetarian