Serve these easy roast peppers, stuffed with goat's cheese and tomato, alongside your favourite meat dish, or as a vegetarian main course. These are so handy because they’re great as a vegetarian option or as a side dish with chicken and fish. I love them cold, sliced on lentils or a salad. Or even as a starter, with the option of some fried pancetta on top.

Pre-heat your oven to 180°C (fan), 200°C, gasmark6 and place the pepper halves on a lightly oiled roasting tray.

Then skin the tomatoes by immersing them in a bowl of boiling water for 5 minutes. Remove and, using a tea towel, rub off the skins. (Frankly, I am lazy and often leave the skins on.)

Quarter the tomatoes and divide them and the garlic between the pepper halves.

If using, roughly chop the anchovies and add 1 fillet per half pepper.

Generously dribble olive oil over and into the peppers (about a dessert spoonful
each). Bake for 45 minutes in total, but 10 minutes before they come out, crumble in the goat’s cheese and torn-up basil leaves.

Babies and kids: Be careful: they come out of the oven very hot, so let them sit for a bit before little mouths taste them. by Amy Sheppard from The Savvy Shopper’s Cookbook 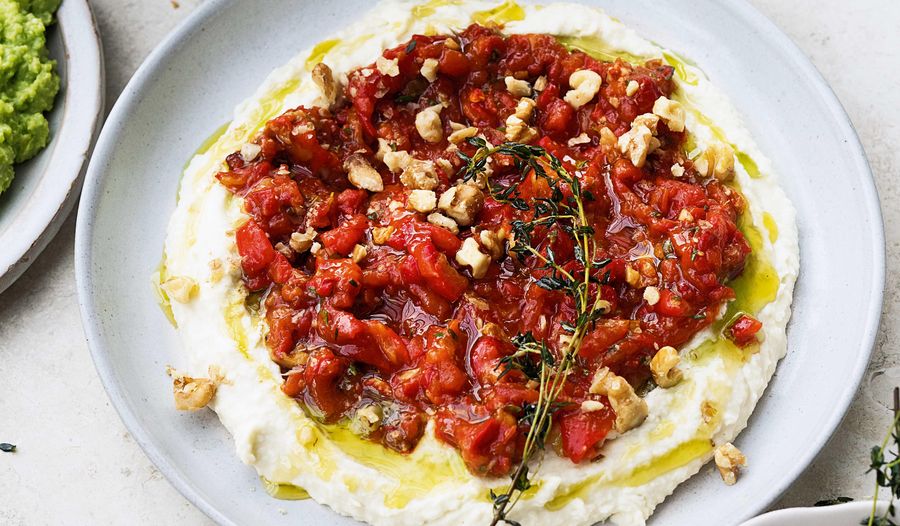