Makes about 20 doughnuts (about 1kg dough) 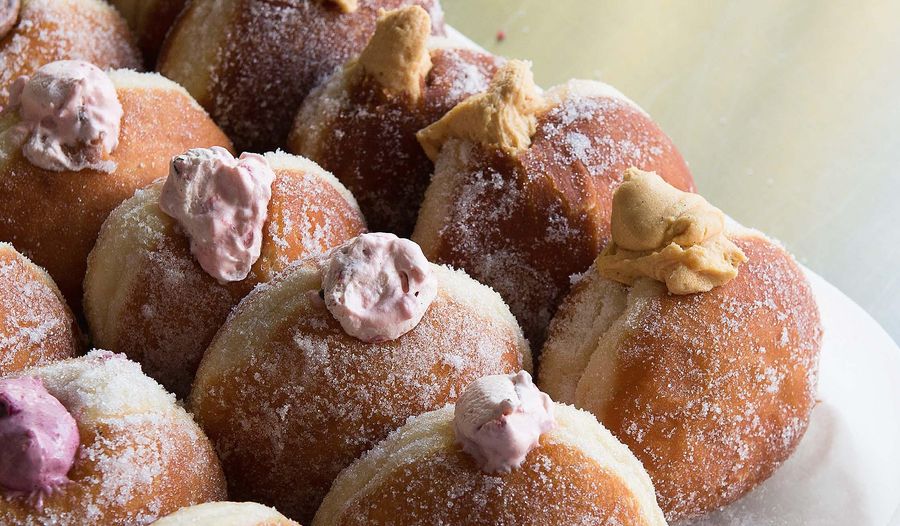 A legendary doughnut recipe from Justin Gellatly. These lipsmacking treats have easy step-by-step instructions to have you enjoying sugary doughnuts in no time! You will need an electric mixer and a piping bag.

To make the doughnut dough:

Put all the dough ingredients apart from the butter into the bowl of an electric mixer with a beater attachment an mix on a medium speed for 8 minutes, or until the dough starts coming away from the sides and forms a ball.

Turn off the mixer and let the dough rest for 1 minute. Take care that you're mixer doesn't overheat – it needs to rest as well as the dough!

Start the mixer up again on a medium speed and slowly add the butter to the dough – about 25g at a time. Once it is all incorporated, mix on high speed for 5 minutes, until the dough is glossy, smooth and very elastic when pulled, then cover the bowl with clingfilm and leave to prove until it has doubled in size. Knock back the dough. then re-cover the bowl and put into the fridge to chill overnight.

The next day, take the dough out of the fridge and cut it into 50g pieces (you should get about 20). Roll them into smooth, taut, tight buns and place them on a floured baking tray, leaving plenty of room between them as you don't want them to stick together while they prove. Cover lightly with clingfilm and leave for about 4 hours, or until about doubled in size.

Get your deep-fat fryer ready, or get a heavy-based saucepan and fill it up to the halfway point with rapeseed oil (please be extremely careful, as hot oil is very dangerous). Heat the oil to 180° C.

When the oil is heated to the correct temperature, carefully remove the doughnuts from the tray by sliding a floured pastry scraper underneath them, taking care not to deflate them, and put them into the oil. Do not overcrowd the fryer – do 2-3 per batch, depending on the size of your pan. Fry for 2 minutes on each side until golden brown – they puff up and float, so you may need to gently push them down after about a minute to help them colour evenly. Remove from the fryer and place on kitchen paper, then toss them in a bowl of caster sugar while still warm. Repeat until all are fried, BUT make sure the oil temperature is correct from each time you fry – if it is too high they will colour too quickly and burn, and will be raw in the middle, and if it is too low the oil will be absorbed into the doughnut and it will become greasy, Set aside to cool before filling.

To fill the doughnuts, make a hole in the crease of each one (anywhere around the white line between the fried top and bottom). Fill a piping bag with your desired filling (see custard method below) and pipe into the doughnut until swollen with pride. Roughly 20-50g is the optimum quantity, depending on the filling; cream will be less, because it is more aerated. You can fit in more than this, but it doesn't such a good balance of dough to filling.

The doughnuts are best eaten straight away, but will keep in an airtight tight tin and can be reheated to refresh them.

To make the custard (crème patissière):

Slit the vanilla pod open lengthways and scrape out the seeds. Put both pod and seeds into a heavy-based saucepan with the milk and bring slowly just to the boil, to infuse the vanilla.

Meanwhile place the egg yolks and the 125g of sugar in a bowl and mix together for a few seconds, then sift in the flour and mix again.

Pass through a fine sieve, discarding the vanilla, and place a sheet of clingfilm on the surface of the custard to prevent a skin forming. Leave to cool, then refrigerate.

Whip the cream and the 2 tablespoons of sugar together until thick but not over-whipped and fold into the chilled custard.