by Georgina Hayden from Stirring Slowly: Recipes to Restore and Revive Inspired by Mexican street food, this tender slow-cooked beef adobo is served in tacos with a griddled pineapple salsa. Perfect for a fun dinner party centrepiece or family feast. The flavours in this marinade are heavily influenced by our favourite meal on a recent trip to Mexico; slow-cooked beef- and pork-filled tacos, on the side of a road. So good was this family's truck that we were advised to get there around 11 a.m. if we didn't want to miss out, and it was so worth it. Punchy but not spicy, this beef brisket dish is perfect for a dinner, even for a party. Serve this tender shreddable brisket with the salsa, a stack of tacos or tortillas, and let people dig in.

Preheat the oven to 180°C/gas 4. Put the ancho chillies on a small baking tray and place in the oven for 2-3 minutes, until lightly toasted. Transfer them to a small saucepan and add enough water to just cover. Place the pan on a medium heat and gently bring to the boil. Remove from the heat and leave the chillies and liquid to cool completely.

Dry toast the cumin seeds in a small pan over a low heat, until they start smelling wonderful. When the chillies are cold, remove and discard their stalks (reserving the liquid) and put them into a blender. Peel the garlic and shallots and roughly chop, adding them to the blender also. Add the ground cloves, toasted cumin seeds, chilli flakes and oregano, then finely grate in the orange zest and squeeze in the juice, and grate in the cacao if using. Add 1 tablespoon of the red wine vinegar, season well and add a splash of the chilli soaking water. Blitz until you have a thick paste, adding more of the chilli water if it is too thick. Spoon the chilli paste into a large bowl and add the brisket. Spread the paste all over, so the meat is completely covered, and leave to marinate in the fridge for a few hours, or overnight if possible.

When you are ready to cook the brisket, place a casserole style pan, one that will hold the brisket pretty snugly, on a medium heat and preheat the oven to 140°C/ gas 1. Pour a good glug of oil into the pan and add the marinated beef, browning it on all sides. When it has browned, add the cinnamon and bay leaves to the pan along with any rema ining marinade and pour in enough beef stock to come just over halfway up the meat. Turn the heat to high, and as soon as it starts to boil, remove from the heat.

Tear a piece of greaseproof paper,slightly bigger than the pan, and rinse under the tap. Squeeze out the excess water, then tuck the damp paper over the top of the brisket. Cover with the lid and pop the dish into the oven. Cook for 3½-4 hours, until the meat is tender and shreds easily. Check it twice during cooking, turning it over so it all gets basted, and topping up the liquid if it starts to look a little dry.

While the brisket is cooking, make the salsa. Finely slice the red onion and chilli – deseeding if you don't want it too hot. Transfer to a bowl, squeeze in the juice of both limes and stir in the remain ing 1 tablespoo n of red wine vinegar. Leave to one side for 30 minutes. Pop a griddle pan on a high heat. Trim the pineapple half, remove the skin and cut into quarters lengthways. Remove the core, and pop the wedges on to the hot griddle.

Keep turning the pineapple, giving it a few minutes on all sides, so it is charred all over. Remove from the griddle, leave to cool, then chop into small pieces, around 1cm big. Pick and chop the coriander leaves also, and pop everything into the bowl with the lime-dresse d red onion. Toss togeth er well and season to taste.

When the brisket is ready, remove the meat from the pot and leave on a board to rest for 15 minutes. Place the pan on the hob and boil the adobo sauce over a high heat, until reduced and thickened – you want a dense, dark gravy to dress the brisket. Tran sfe r the meat back to the casserole dish or to a serving dish, untie the string, and pour over the th ickened adobo sauce. Shred the meat with two forks and serve alongside the pineapple salsa. Perfect with steamed rice and griddled tortillas. by Mari Mererid Williams from One Pan. 100 Brilliant Meals 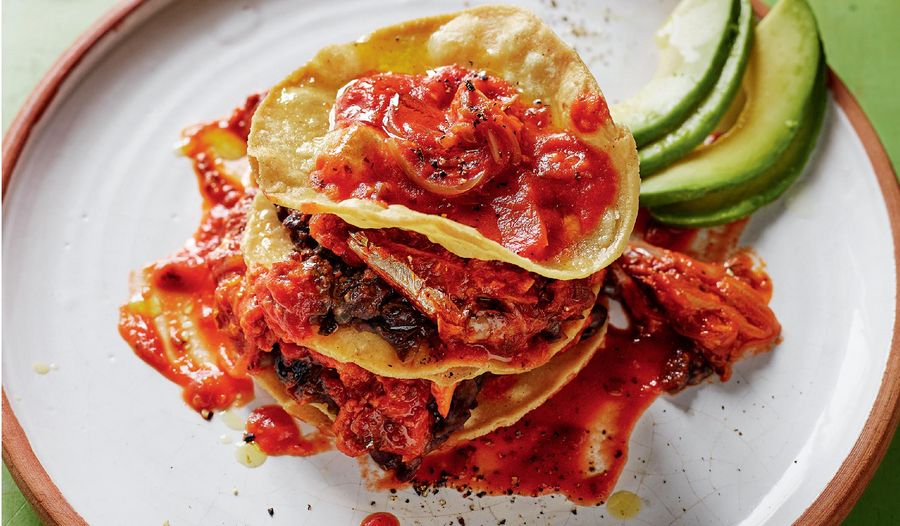 by Rukmini Iyer from The Green Roasting Tin From the book: Stirring Slowly: Recipes to Restore and Revive