Ottolenghi’s Plenty More: behind the scenes on the photoshoot for Yotam’s new book As Editorial Director for Illustrated Books at Ebury Publishing, Sarah Lavelle has the enviable job of overseeing photoshoots for all Yotam Ottolenghi‘s cookery books. In an exclusive article for The Happy Foodie, she shares her experience of the photoshoot for Plenty More, Yotam’s fourth cookbook. Read on, to savour the experience of life on Ottolenghi’s cookbook team, and feast your eyes on Sarah’s exclusive photos from the shoot. Be warned though, ferocious mouth watering and stomach rumbling will result if you attempt to read this when hungry.

Yes, I’m incredibly lucky. A new Ottolenghi book is a big, shiny reason to be cheerful. Yotam has changed the way that people cook and eat in this country and very few chefs can claim that.

The recipe list for his fourth book, Plenty More, has already created a frisson of excitement and anticipation at Ebury, and seeing Yotam’s dishes brought to life at the photoshoot is a treat. It’s not an especially glamorous process and the hours are long, but here at the Ottolenghi test kitchen, based under the railway arches in Camden, Yotam surrounds himself with other enthusiastic, talented people.

There’s little fuss or stress. We are on the fifth day of a twelve-day photoshoot, and the dedicated Tara and Esme toil like demons, roasting aubergines and chopping butternut  as the trains rumble overhead. Tara keeps a huge bar of milk chocolate to hand for regular sugar hits – after all, even the Ottolenghi team needs an occasional break from garlic, tahini and coriander. The office staff manoeuvre around boxes of spices, syrups and oils (all orders from the Ottolenghi online store are dispatched from here). Next door the bakery crew are making pastries and sourdoughs for the Ottolenghi shops.

Jonathan Lovekin has been the photographer on three Ottolenghi books, and the collaboration between him and Yotam is relaxed and easy. As the dishes fly out of the oven, Jonathan is in there with his camera. Plenty More focuses on techniques, so we want to capture the processes of preparation and cooking: movement, heat, the texture and form of raw and cooked ingredients. Jonathan stops Tara as she mixes beetroot in a bowl, snaps and then stands back again. Yotam ‘plates up’ and grabs a handful of herbs. Then we clatter down the staircase to the warehouse below, and a table set up between the outside door of the storeroom and the car park.

We’re shooting Middle Eastern and Med‐inspired food, and it has poured with rain for four days out of five so far. With an untested team, any editor would be justified in feeling nervous, but we’ve all worked together long enough to know that it won’t impact on the photos. Jonathan has an uncanny ability to conjure up the colours of a Greek island market in damp NW1. And Yotam’s deft combinations of ingredients are little short of magical. I can feel confident. Yotam scatters over a little baby parsley, Jonathan walks around the table to judge the shot. There’s a bit of chat about whether we need  to take out a spoonful – was it better before?  No cheat’s gravy browning or egg white here; an extra drizzle of olive oil is the most primping that goes on. It’s only beetroot with yoghurt and macadamia nuts, but it’s dazzling. Then it’s back upstairs to look at the shots.

On screen, an image pops up that is immediately recognizable as an Ottolenghi dish. All the elements are  there –  the colour, the texture, the sheer gorgeousness of  the thing.

There’s an understanding between Yotam and Jonathan that results in stunning, natural shots. Jonathan enlarges the image to check the definition – he and Yotam will narrow down the selection to a few preferred images. All the photos will be handed over to the designer, Caz Hildebrand, who comes up with initial ideas for layout and visuals. We might need a handful of reshoots but it’s surprisingly few, given the number of recipes (around 100). The next  few months will be spent getting our pages absolutely perfect,  from the look to the content.

Full disclosure coming up: yes, we eat all the food that’s made for the photoshoot. I sample roasted aubergine with an incredible, almost sweet black garlic sauce. (Black garlic is one of the ‘new’ ingredients of Plenty More, so expect a run on it in Waitrose come September.) And I marvel at the combination of beetroot, rhubarb and blue cheese in a salad – it seems unlikely but it works beautifully. I leave the shoot quietly happy. Jonathan and Yotam are pondering a tray of roasted Brussels sprouts – if anyone can make them look good, these guys can.”

Inspired by what you see? Recreate your own Ottolenghi dishes at home with these recipes from Plenty More: 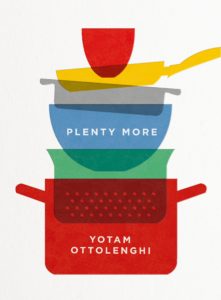 Check out our collection of the greatest vegetarian cookbooks, including Yotam Ottolenghi’s Plenty.