Nick Knowles: How I Went Vegan Nick Knowles is healthier than ever. The secret? A mostly vegan and vegetarian diet. We caught up with Nick to pick his brains about his cookbook Proper Healthy Food, how he went vegan, and how you can eat more veggie food too.

Tell us a bit more about your book, Proper Healthy Food…

It’s a vegan veggie cookbook aimed at people who would like to expand their veggie eating but are a little nervous about the idea of ending up eating rabbit food. I’m a big lad at 6’2” and 100KG and need a proper dinner when I get in from a day standing on a cold building site and these are wholesome, yummy meals.

People could get the book and say let’s do meat-free Mondays as a start and try a recipe once a week. It’s important – it can extend your life and makes what life you have more active and you feel better so it’s important to give it a go in some way, shape or form. 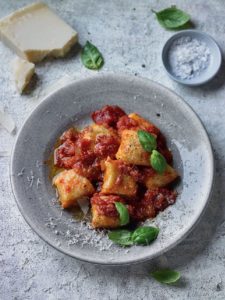 What benefits are you seeing from eating more vegan food?

I’m lighter physically, feel lighter in my mind too – more energy, less sluggish. My cholesterol is down – my blood pressure is better. I sleep better – honestly I’m not making this stuff up – it’s undeniably the result of a more plant based diet.

What are your top tips for anyone wanting to switch to a vegetarian or vegan diet?

Start slow and be kind to yourself. Allow yourself to fail. You are not on a wagon – you can fall off. I eat vegan most of the time but I’m not a vegan. If I’m in a train station hungry and there’s no vegan I’ll eat veggie – cheese or eggs. And if I really, really fancy meat or fish I’ll have it because I know I won’t tomorrow or next week. This way I went from meat three times a day to six or seven times in a year. Start with a day a week and see how you get on. Get used to tea and coffee without milk – try almond milk. I really don’t like soya milk but quite like the coconut one. Try stuff and see what suits you.

Is there an ingredient you’re really enjoying cooking with at the moment?

It’s like a slightly pickled lemon sauce. Japanese ingredient, lovely on salads and fresh raw veg and now easily available in supermarkets but in the book I’ve kept things simple. Unlike a lot of cookbooks I was determined these recipes work for everyone and the stuff is easily available.

What cookbooks would we find on your bookshelf?

The extraordinarily talented Christopher Burt with Momo No Ki and Mayumi Nishimura’s Mayumi’s Kitchen. But I’m really interested in what people are doing online – I’m finding some massively creative chefs on line like Georgina Fuggle in Fuggle Antics or Gaz Oakley AKA the Avant Garde Vegan.

What’s your go-to recipe for vegetarian or vegan food naysayers?

My chestnut thick vegetable stew with vegan Parmesan and rosemary dumplings (get the recipe here!) followed by sweet and sour fruit with oat and crushed hazelnut crumble with vegan ice cream.