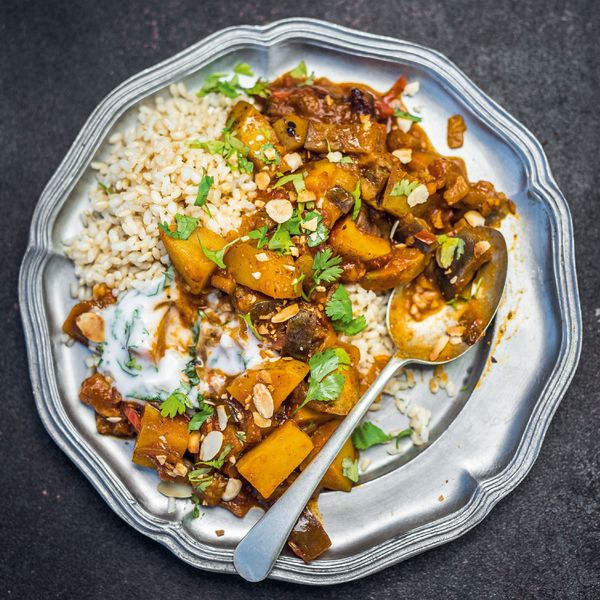 Our favourite plant-based twins are back with a brand new instalment of vegan recipes. The Happy Pear's new cookbook, Vegan Cooking for Everyone, will be released on 9th July and features one of the most innovative and useful approaches to cooking we've seen yet. Part collection of vegan recipes and part guide on the building blocks of creating your own dishes from scratch, it'll help to hone your intuition in the kitchen and get more creative with your cooking as you master the basics of putting together a delicious vegan meal.

Vegan Cooking for Everyone is divided up into chapters dedicated to all of your favourite meals, from pasta, pizza and salads to one-pot winners and stews. Each section begins with a handy guide to the essential elements that make up each dish and ingenious grids designed to help you mix and match your flavours and ingredients as you cook them, an approach that feels particularly useful as we all navigate lockdown cooking. To give you a taste of what's in store, take a look at this exclusive extract from the chapter on Stews, Curries, Noodles and One-pot Wonders, featuring The Happy Pear's expert advice on each of the essential components you need and a handy guide on how to build-you-own stew that'll get you creating your own delicious plant-based warmers in no time.

Pre-order your copy of Vegan Cooking for Everyone here.

Base veg: The base veg for stews, curries and meals in minutes is usually some combination of onions or spring onions (or if you want to be a little fancy, pearl onions or shallots), garlic, ginger and chilli. You may be less likely to use any ginger or chilli in stews, but for curries and coconut-based dishes you will use all four of the above (sometimes known as an ‘Indian stock’). Simply cook the peeled and diced base veg in 1 or 2 tablespoons of oil on a high heat for 3 to 4 minutes, until the veg start to brown. Browning is an indicator of flavour development and caramelization, which is what you want here.

Core veg: The core veg you use will have one of the biggest impacts on the cooking time of your dish. Aim for 700g to 750g of vegetables in total. In the template on p. 205 of Vegan Cooking for Everyone we say 25% for simplicity, but you can add more if you want. If you want your dinner to be a fast-cooking midweek dinner, then choose fast-cooking veg, such as courgettes, mushrooms, pak choi, peppers, spinach, spring onions, sugar snap peas, mangetout or green beans. Finely chop your fast-cooking veg, add to the base with a generous pinch of salt, and cook for a few minutes on a high heat, stirring regularly. The nice thing about most fast-cooking veg is that nearly all of them can be eaten raw or with a bit of crunch, which makes them perfect for quick dinners. Veg that take longer to cook and are therefore better suited to stews or slowercooked one-pot wonders are aubergines, cauliflower, potatoes, root veg (such as carrots, parsnips and turnips), squash, sweet potatoes or pumpkin.

For a stew we usually chop 600g to 700g of these longer-cooking veg into bite-size pieces, then add them to the cooked base along with a good pinch of salt. Turn the heat down to medium, cover with a lid and sweat for 10 to 15 minutes, remembering to stir occasionally. Alternatively, you can bake these longer-cooking veg on a baking tray in an oven preheated to 180°C fan/400°F/ gas 6 for 25 minutes with 1 tablespoon of oil and a pinch of salt, tossing to coat.

Beans and legumes: We add tinned beans, lentils or chickpeas to the vast majority of our stews, curries and fast-cooking dinners. They are such a good way of bulking out a dish and adding more bite, substance and texture while adding loads of nutrition too. Beans are high in fibre and protein and are mostly made up of complex carbohydrates, so they are great for energy. We generally use tinned beans at home, as they are so easy and practical, but in our cafés and commercial kitchens we soak and cook dried beans. We usually use 500g of tinned beans (2 x 400g tins of beans after they have been drained and rinsed). Use whatever beans you like or that best fit the type of dish you are making. The ones we use most often are black beans, butter beans, cannellini beans, chickpeas, kidney beans and lentils.

Liquid: The liquid ingredients are the base of your dish and this is where a lot of the flavour comes from. In many cases, what turns a good dish into a great dish is the cooking liquid. Classic French cooking requires reducing the liquid for long periods of time to develop and concentrate fl avour, but you can make a super-tasty sauce in minutes instead of hours!

Your liquid ingredients should make up approx. 35% of your dish, but there will be some times when slightly less is needed and others when it needs slightly more. For simplicity the framework below says that 25% to 35% of your dish is liquid, but realistically it’s more like 40%, as we base it around the volume of tins.

• Tomato-based sauce: Tomato-based sauces are great for Mexican chilli, stews, one-pot casseroles and, of course, pasta dishes. We tend to use tinned chopped tomatoes, some tomato purée (to add some sweetness and body to the sauce) and a little sweetener (maple syrup) to balance the natural acidity of the tomatoes and seasoning. For a Mexican chilli, for example, we use chilli powder, ground cumin, ground coriander, smoked paprika, salt and ground black pepper, with some lime juice as acid to give vibrancy and some chopped coriander to give freshness.

• Nut butter/tahini emulsion: To make a creamy sauce, blend some nut butter (such as almond or peanut butter or tahini) with some water or veg stock, spices and seasoning. The nut butter will add body, fat and more satiation to the sauce. We usually season it with some tamari or soy sauce, freshly squeezed lime juice, spices such as ground ginger for a little heat and maybe some sweetener too. This type of sauce works well for a satay-type dish or curry.

Once you add your liquid to the stew, bring it to the boil, then cover the pan, reduce the heat and cook at a gentle simmer until the veg are soft and tender and almost melt in your mouth.

Flavour agents: The flavour agents are the core flavours that make one type of dish stand out from another. They are the flavour notes that differentiate a Brazilian feijoada or a French ratatouille from a Moroccan tagine. Each will have its own subtle nuances that will be based around the five flavours: salty, bitter, sweet, sour and umami.

Garnish: Stews, curries and one-pot dishes are delicious, but they can sometimes look a bit drab. All they need is a generous garnish to brighten them up.

HOW TO BUILD A STEW

This highly flexible framework can expand and contract if you want to include more veg, beans, etc. A stew will typically take a while to cook, so we usually use slower-cooking veg. To cook all these dishes in half the time, simply use fast-cooking veg and spring onions instead of onions.

Pre-order your copy of Vegan Cooking for Everyone​​​​​​​ here.