A delicious chocolate dessert from The Great British Bake Off's Big Book of Baking. This wonderful recipe for Black Forest Chocolate Fondants from contestant Richard Burr is perfect for impressing your guests at a dinner party. Very dark and very rich! Tart fresh cherries are an excellent complement to the intense chocolate fondant: they are added to the little puddings, filled and dipped in chocolate for the decoration, and used to flavour the whipped cream accompaniment.

1 Start by making the coulis. Put the cherries into a mediumsized pan and add the sugar, lemon juice and 1½ tablespoons water. Stir over low heat until the sugar has dissolved, then turn up the heat so the mixture is boiling gently. Cook, stirring occasionally, for 5–10 minutes until the cherries are very soft.
Tip into a food processor and blitz to make a smooth purée. Press through a sieve into a bowl, then cover and keep in the fridge until needed.

2 To make the chocolate fondant mixture, put the cherries into a small bowl and add the cherry brandy. Leave to macerate until needed. Put the chopped chocolate and butter into a heatproof bowl, set over a pan of steaming hot water (don’t let the base of the bowl touch the water) and melt gently, stirring
occasionally. Remove the bowl from the pan and set aside to cool until needed.

3 Put the whole eggs and yolks into a large mixing bowl (or a free-standing electric mixer fitted with the whisk attachment). Add the sugar and whisk with an electric mixer (or in the freestanding mixer) for about 4 minutes until the mixture is very thick and mousse-like and will make a ribbon-like trail when the whisk is lifted from the bowl. Slowly whisk in the melted chocolate mixture. Sift the flour on to the mixture and carefully fold in with a large metal spoon or plastic spatula.

4 Spoon enough of the chocolate mixture into the prepared pudding moulds to half fill them. Drain the macerated cherries (save the liquid for the chocolate cherry filling) and add 2 cherries to each pudding mould. Stir the chilled cherry coulis, then spoon a teaspoon of coulis over the cherries in
each mould (cover the remaining coulis and return it to the fridge). Spoon the rest of the chocolate mixture on top andspread evenly – the mixture should be about 1cm below the rim of the mould. Cover with clingfilm, then set the moulds on the baking sheet and chill for at least 30 minutes or until ready
to bake (the moulds can be prepared up to 4 hours ahead).

5 Meanwhile, prepare the chocolate cherries. With the tip of a small sharp knife, carefully slit open each cherry at the side and remove the pit – keep the cherry as intact as possible; set aside. Chop up 25g of the dark chocolate and melt gently in a small heatproof bowl, as on page 293. Remove the bowl from
the pan and, using a hand wire whisk, whisk in the cream and the reserved cherry brandy from macerating the cherries for the fondant mixture).

6 Set the piping bag in a mug or small jug (don’t snip off the tip) and pour the chocolate mixture into it. Leave until the chocolate has thickened up enough to pipe and to hold a shape without running, then snip off the end of the bag. Pipethe mixture into each cherry, through the slit in the side, to fill the cavity and to ‘glue’ the cherry back into shape. Set the cherries on a plate lined with baking paper and chill for about
20 minutes until firm.

7 Meanwhile, chop up and melt the remaining chocolate in a small heatproof bowl, as on page 293. Remove the bowl from the pan. Holding each cherry by its stalk, dip it in the melted chocolate to coat thoroughly. Put back on the lined plate and chill for about 30 minutes until set.

8 To make the cherry cream, whip the cream in a mixing bowl just until it stands in soft peaks. Gently fold in the rest of the chilled cherry coulis. Spoon the cream into a serving bowl, cover and keep in the fridge until ready to serve.

9. When ready to bake, heat your oven to 180°C/350°F/gas 4. Uncover the moulds and bake in the heated oven for 11–15 minutes until slightly risen and the top no longer looks raw and damp – the mixture in the middle of the surface will still be slightly soft. Quickly turn out on to serving plates and dust with icing sugar. Decorate each plate with 2 chocolate cherries and serve immediately, with the cherry cream. by Lizzie Kamenetzky from The Great British Bake Off: Christmas by Heather Thomas, Alina Tierney from Eat to Sleep 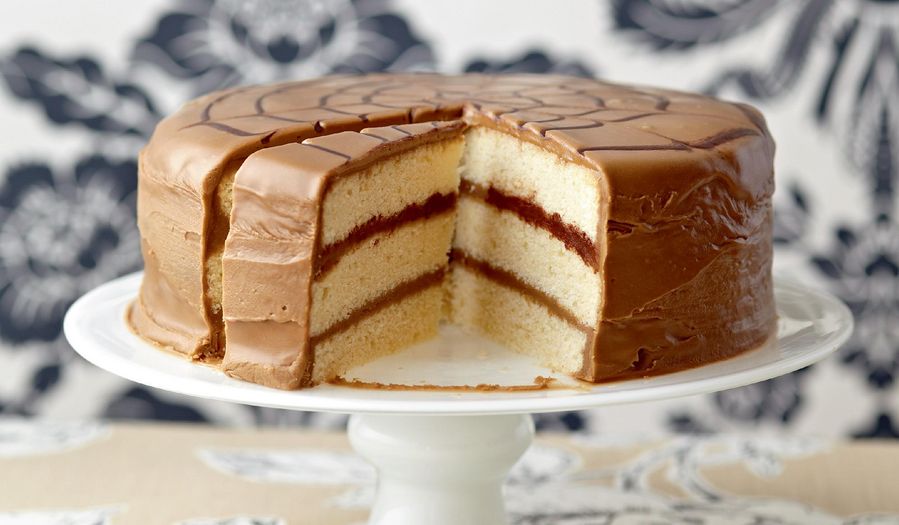