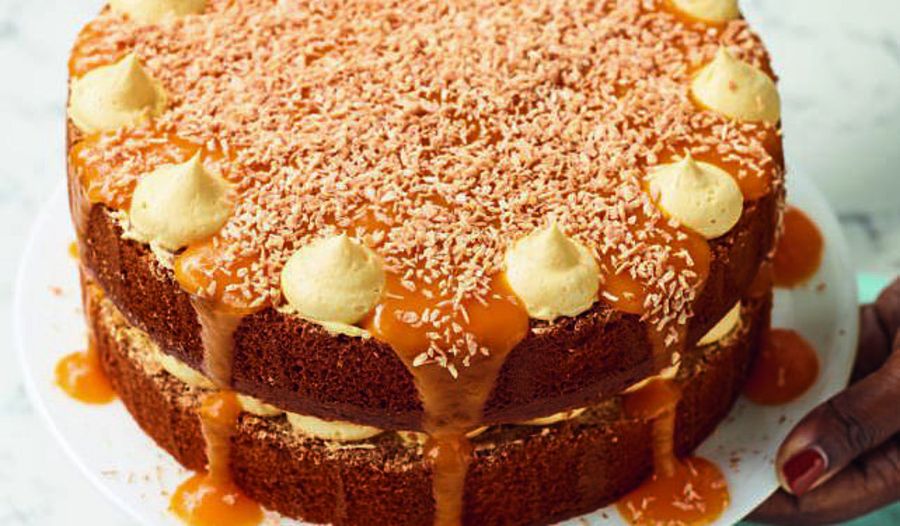 From her BBC2 series Nadiya Bakes, Nadiya Hussain's mango and coconut layer cake is inspired by the flavours of her childhood. An all-in-one method bake, it's an easy showstopper. 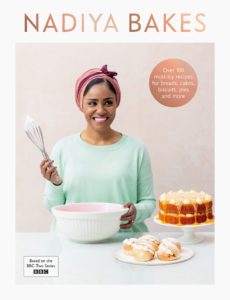 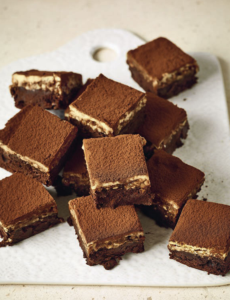 These flavours are as traditional as they get for me. They’re the flavours I grew up with, though while mango was cooked in curries, dried or eaten in the sun under the shade of the tree, it was never put in a cake! The same went for coconut. If it wasn’t being eaten dry, it was being stewed or eaten early, drinking its sweet water and scooping out its young flesh, but never ever in a cake. So, let’s fix that, and put all that wonderful stuff straight into a cake, shall we?

You will need: two 20cm, deep round cake tins and a piping bag.

Toast the coconut in a small pan until it is golden and sprinkle into the bases of the cake tins, making sure to evenly distribute it. Toasting it will enhance the flavour (untoasted coconut is no different to the wood chip shavings I lay out for my rabbit). Add the mango in some sort of orderly fashion, straight on top of that coconut.

The cake is an all-in-one method, so really easy. Pop the yoghurt into a large mixing bowl along with the sugar, eggs, flour, baking powder and salt and  mix until you have a smooth, shiny cake batter. Pour the mixture into the tins and tap the tins a few times on the work surface to level off the top. Bake for 40–45 minutes until golden and a skewer inserted comes out clean. Take the cakes out and leave in the tins to cool for 15 minutes, then turn out and leave to cool completely.

Meanwhile, make the buttercream by adding the milk to a saucepan with the sugar. As soon as it just comes to the boil, take off the heat and mix, making sure the sugar has melted.

Now add the egg yolks to a bowl with the cornflour and whisk. In a steady stream pour in the hot milk mixture, making sure to stir all of the time. Pour the mixture back into the pan and heat gently until it all thickens into a really thick custard that coats the back of the spoon. Transfer to a large bowl, cover with clingfilm and leave to cool, then chill in the fridge.

When chilled, whisk the custard mix, then add a good tablespoon of butter at a time, whisking after each addition. Keep whisking until you have a really stiff, pipeable buttercream. Pop into a piping bag.

Take the first cake, with the fruit side facing upwards, and arrange on a serving dish. Pipe swirls of the buttercream all around the edge and then in the centre, covering the top of the cake. Pop the other cake on top and make the same swirls around the edge, avoiding the middle and leaving gaps between the swirls.

Pour the mango pulp into the centre, allowing it to drip down the sides. Sprinkle it with the toasted coconut and serve the cake with Greek yoghurt. 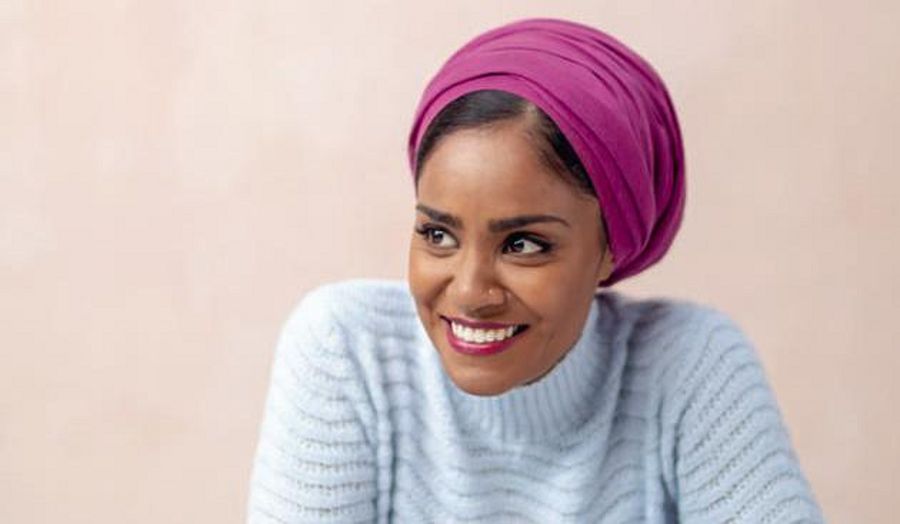 From the book: Nadiya Bakes 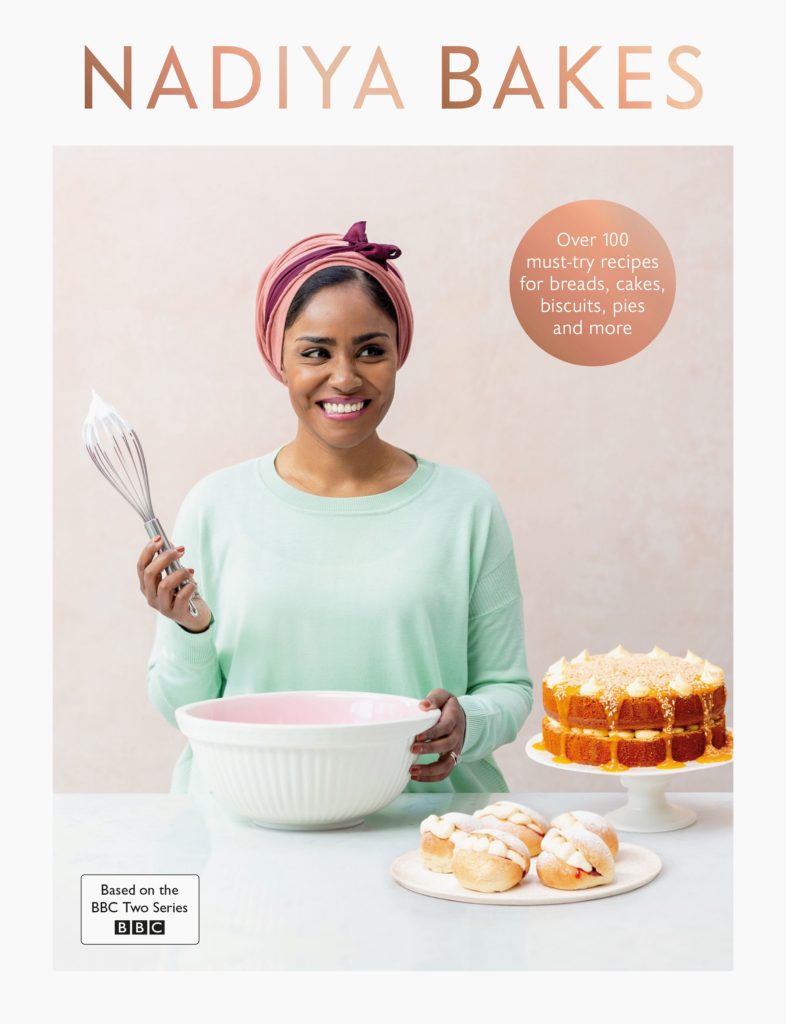 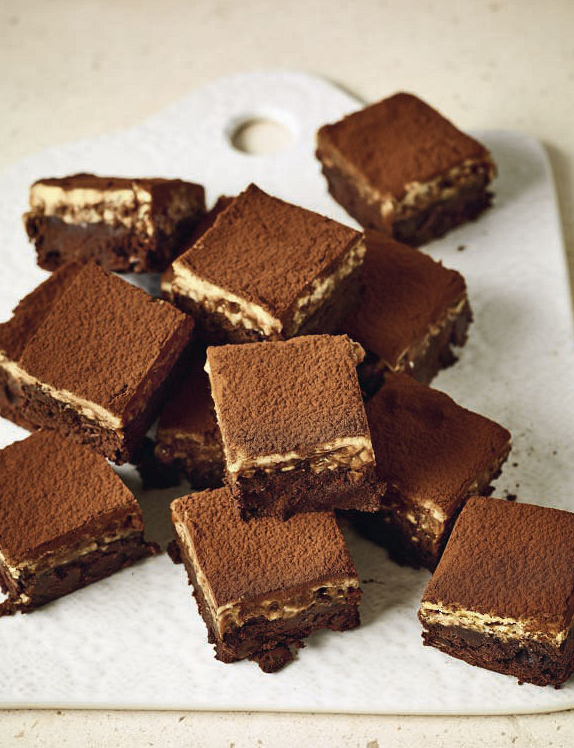