by Nadine Levy-Redzepi from Downtime: Deliciousness at Home For a show-stopping alternative to a traditional birthday cake, look no further than this stunning Giant Macaron Cake, filled with whipped cream and berries. This might be the most unusual way I have put my all-purpose cake batter to use: as the filling rather than the foundation of a multi-tiered layer cake. We always let our daughters choose what they want for their birthday dessert. When it is Genta’s turn, she inevitably chooses something pretty and girly instead of a traditional cake. The year she requested macarons, I thought making one big macaron then turning it into a layer cake by adding cream, cake and more cream would be fun, and I was right. As it turns out, a giant macaron is faster to make than a bunch of small ones, and it looks really impressive. It’s a little messy to serve, but it’s still delicious.

1. Make the macaron layers: Place a sieve in a large bowl and add the almond flour, icing sugar and baking powder. Sift the dry ingredients into the bowl, using your fingers to rub the almond flour through the mesh if it is stubborn. Whisk 4 of the egg whites (110 g/4 oz) with the food colouring in a medium bowl just until the mixture is evenly coloured. Set it aside. Don’t be timid with the food colouring. You want the macaron to be a bright, bold pink.

2. Combine the granulated sugar with 75 ml (2½ fl oz) water in a small saucepan. Bring to a boil over high heat, stirring to help dissolve the sugar. Attach a sugar thermometer to the pan and cook until the syrup reaches 118°C (244°F), 3 to 5 minutes.

3. While the syrup is cooking, use an electric mixer set on high speed to whip the remaining 4 egg whites (110 g/4 oz) in a large bowl just until they form soft peaks. Still beating on high, slowly pour a stream of the hot syrup into the bowl – do not pour directly into the beaters, or the syrup will splash. Keep beating on a high speed until the egg whites form stiff, glossy peaks.

4. Let the meringue cool until it is warm but not hot (about 48°C/ 120°F), which can take about 20 minutes. Add the coloured egg whites to the almond flour mixture and use a big rubber spatula to stir them together until blended: Scrape the meringue into the bowl and fold it all together, reaching down to the bottom of the mixture with the spatula and bringing it up and over the rest of the mixture. Turn the bowl one quarter turn and repeat until the mixture is evenly coloured but still light and fluffy.

5. Cut 2 sheets of baking paper. Using a 23 cm (9 inch) round cake tin as a template, draw a circle on each baking paper sheet with a dark pencil. Turn the paper over so you can see the circle from the opposite side. Spoon half of the meringue mixture into the centre of each circle and use the spatula to spread it evenly towards the edges with a slight dome in the centre. Let the shells stand, uncovered, at room temperature for about 1 hour while you make the cake layer. Letting the macaron shells stand before you bake them is important! The skin that develops on the surface will keep them from spreading as they bake.

6. While the macaron layers are standing, make the cake layer: Preheat the oven to 180°C (160°C Fan), with the oven racks in the top third and centre of the oven. Lightly butter a 23 cm (9 inch) round cake tin, line the bottom with a baking paper round.

7. Sift the flour, baking powder and salt together into a medium bowl. Beat the sugar and butter in another medium bowl with an electric mixer until it is pale, about 3 minutes on high speed. Beat in the egg, until light. With the tip of a small knife, split the vanilla pod lengthwise, then scrape the vanilla seeds into the bowl, saving the pod for another use.

8. With the mixer on low speed, add the flour mixture in thirds, alternating with two equal additions of the cream, and beat until smooth. Spread the batter evenly in the tin and sprinkle with flaky salt.

9. Bake on the centre rack until the top of the cake is golden brown and springs back when pressed with a fingertip, about 20 minutes. Leave the oven on. Let the cake cool in the tin on a wire rack for about 10 minutes. Run a knife around the inside of the tin to loosen. Invert and unmould the tin onto the rack and discard the paper. Turn the cake right side up and let cool completely.

10. Now, back to the macaron layers. By this time a thin crust should have formed on the surface. Bake the shells until they feel mostly set underneath the crust, about 30 minutes. Turn off the oven, prop the door open slightly with a wooden spoon, and let them slowly cool and crisp, 45 minutes to 1 hour. Remove from the oven and cool completely. The macarons may form browned ‘feet’ around the edges as they bake. You can trim these off if you prefer after they cool.

12. No more than 30 minutes before you plan to serve the cake, assemble the components. Carefully peel the paper from one of the macaron shells and place the shell on a cake plate flat side up. Spread it with half of the cream and scatter the strawberries evenly on top. Gently set the cake layer on top. Cover with the remaining cream and the raspberries. Carefully remove the paper from the second macaron, and place it on top of the raspberries, domed side up. Use the less-perfect of the two macaron shells for the base layer, saving the prettier one for the top. Don’t worry if there are cracks, it will still taste great.

13. Let the cake stand for 15 to 20 minutes to slightly soften the meringue. Use a thin, sharp knife to cut into wedges. 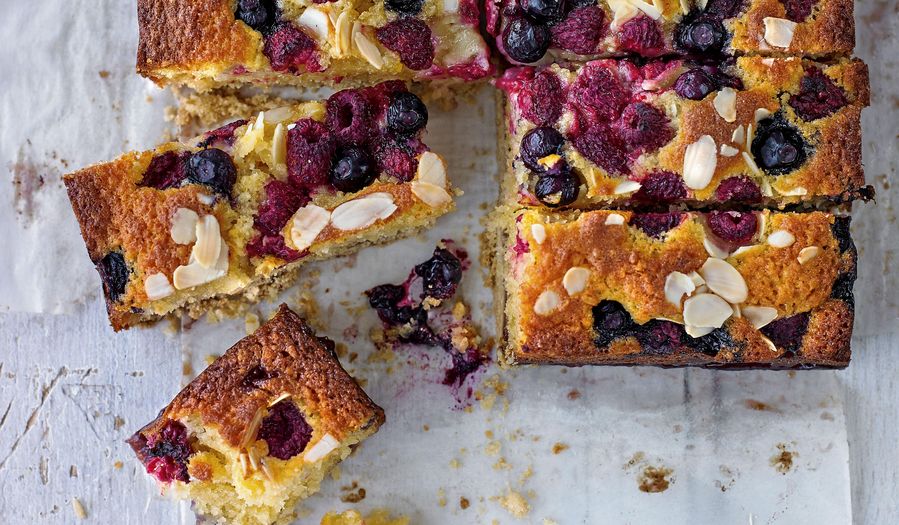 From the book: Downtime: Deliciousness at Home 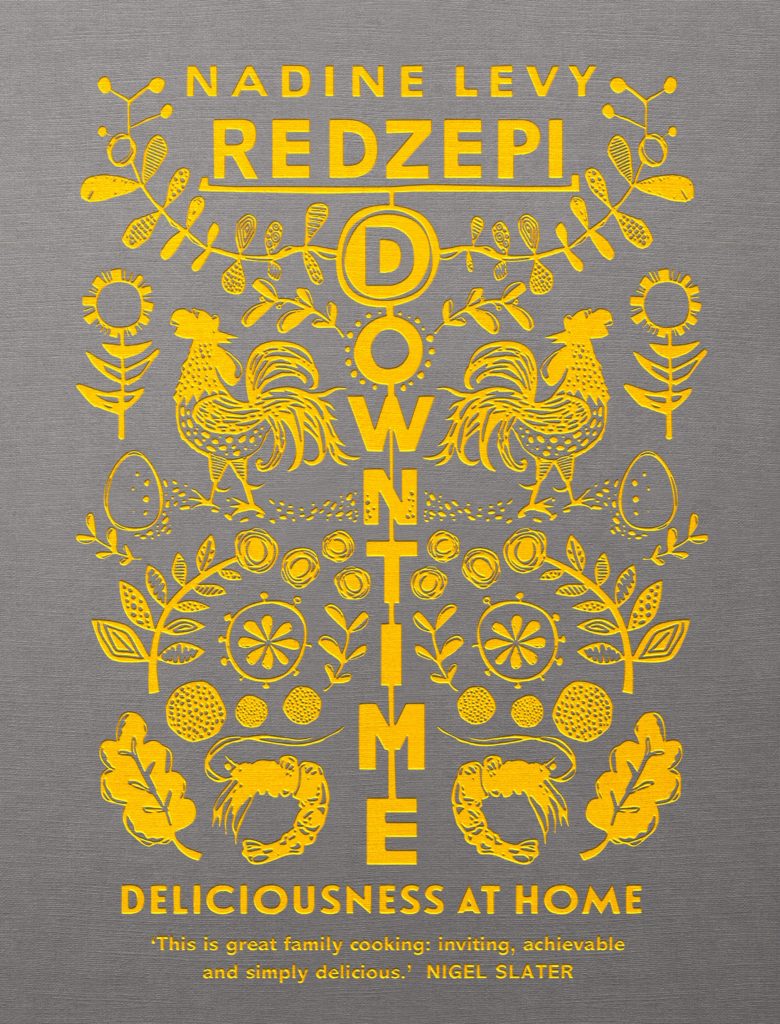 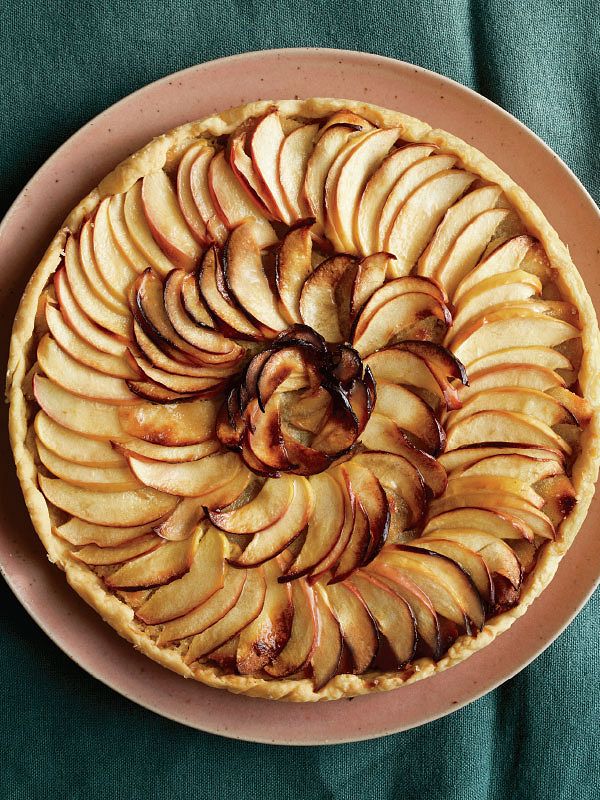