These indulgent Creme Egg Cupcakes from Primrose Bakery are a winning combination of chocolate brownie sponge, marshmallow icing and a hidden mini creme egg. A perfect Easter treat for kids. 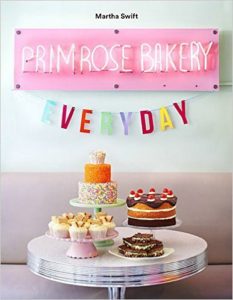 My eldest daughter Daisy, loved creme eggs when she was little, so these cupcakes always remind me of her, and, of course of Easter, when the famous Cadbury’s creme eggs are available to buy for a limited time. We use the mini ones in this recipe and the work perfectly without the cupcakes being too sweet.

This icing is easiest to work with while it is still a little warm, so try to use it right away.

You will need an electric hand mixer.

Melt the butter and chocolate together in a microwaveable or heatproof bowl, either in the microwave in short bursts or over a pan of lightly simmering water. Stir the mixture continuously to ensure the chocolate melts completely, then set aside to cool slightly.

In a separate bowl, beat the sugar, eggs and vanilla extract together, using an electric hand mixer, until pale and fluffy.

Pour the slightly cooled chocolate mixture into the sugar and egg mixture and gently fold together with a spatula. Sift the flour on top and fold through until well combined.

Spoon the mixture evenly into the muffin cases, filling each case about two-thirds full.

Bake for 15-20 minutes, or until an inserted skewer comes out clean. Allow the cupcakes to stand in their tin for 10-15 minutes before turning out onto a wire rack to cool completely.

To make the icing, place the sugar, golden caster sugar and water in a pan and cook on a high heat until the mixture reaches ‘soft-ball’ stage – this is when the bubbles in the mixture almost start to stick together and the mixture would drop off a spoon in a smooth, slow stream. This could take up to 6 minutes.

In a separate, clean bowl, whisk the egg whites until soft peaks start to form.

When the sugar mixture has reached soft-ball stage, remove from the heat.

Turn the mixer up to a medium-high speed and continue whipping the mixture until it becomes thick, glossy and cool. Add the vanilla extract towards the end of the mixing process.

Divide the icing between two bowls and colour one of them with the yellow gel food colouring until the icing becomes a pale egg yellow colour.

To assemble, using a small pairing knife or cupcake corer, remove a small piece of sponge (about 2cm) from the centre of each cupcake.

Place a whole mini creme egg into each of the holes you have created.

Watch how to make the videos below: From the book: Primrose Bakery Everyday