A luxury ice cream, with a mild but true coffee flavour and a very fine texture.

You will need a pestle and mortar and an ice-cream maker or freezing tray.

First put 125g/¼lb of freshly roasted coffee beans in a marble mortar. Do not crush them but simply bruise them with the pestle, so that the beans are cracked rather than broken up. Put them in a saucepan with 600ml/1 pint of single cream, 3 egg yolks well beaten, a strip of lemon peel and 90g/3oz of pale brown sugar. Cook this mixture over very gentle heat, stirring constantly until it thickens. Take from the heat and go on stirring until it is cool. Strain through a fine sieve. When this cream is quite cold and thick, into it fold 125ml/¼ pint of double cream lightly whipped with a tablespoon of white sugar. Freeze in an ice-cream machine or turn into a freezing tray, cover with foil, and place in the ice-making compartment of the refrigerator, which should already be turned to maximum freezing point. Freeze for 3 hours; after the first hour stir the ice cream, turning sides to middle. Turn out whole on to a flat dish and cut into four portions.

The coffee beans can be used again for a second batch of ice cream; and a less expensive basic mixture using 600ml/1 pint of milk and 5 egg yolks still makes a very excellent ice. Always use a light roast of coffee. 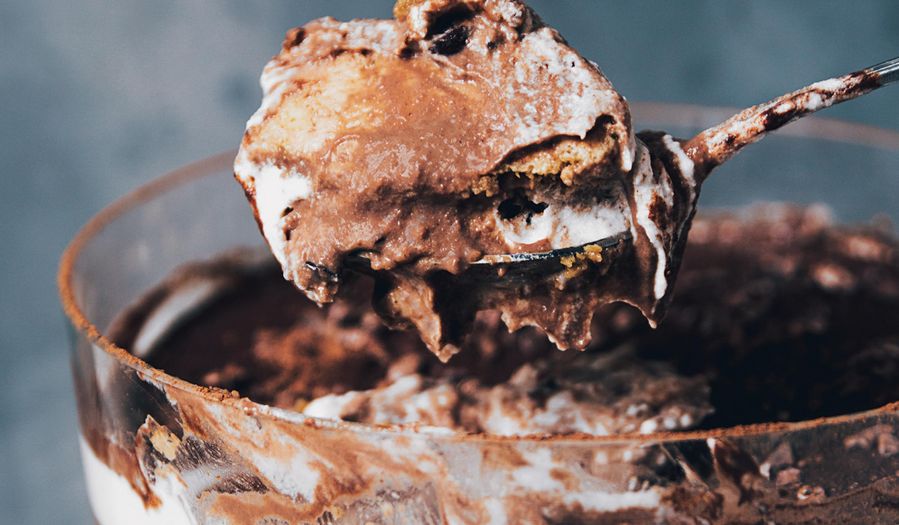 by Denise Smart from Meal in a Mug