This is Jamie Oliver's Veggie Chilli recipe from his Family Super Food TV series on Channel 4. This recipe is a great crowd-pleaser and a delicious way to get more veggies into your diet. One the whole family is bound to love. Using cocoa powder helps to add a lovely depth of flavour here, and nutritionally it’s high in the mineral copper, which we need to keep our skin and hair strong and healthy

Put a large casserole pan on a medium-low heat and a griddle pan beside it on
a high heat. The idea here is to work in batches, starting by charring the veg
on the griddle to add a smoky flavour dimension. Peel the onions and cut into
1cm dice, char on the griddle for 3 minutes, then place in the casserole
pan with 2 tablespoons of oil, the cumin seeds, paprika, cocoa and peanut
butter, stirring occasionally. Slice the chilli(es) 1cm thick and griddle while
you deseed and roughly chop the peppers and chop the sweet potatoes into
rough 2cm chunks (leave the skin on for extra nutritional benefit, just give
them a wash). Griddle it all, adding to the casserole pan as you go. Finely
chop and add the coriander stalks.

Preheat the oven to 180°C/350°F/gas 4. Drain the beans in a sieve over the
casserole pan so the juices go in, then tip the beans into the griddle pan in an
even layer. Have faith and leave them without stirring until they start to char
and burst, then add to the veg. Pour in the tinned tomatoes, breaking them up
with a wooden spoon. Stir well, then pop the lid on ajar and leave for 1 hour,
or until thickened, stirring occasionally. Meanwhile, wash the potatoes, prick,
then bake for 1 hour, or until crispy on the outside, fluffy in the middle.

Just before serving, finely chop the coriander leaves and stir through the
chilli, taste and season to perfection. Cut a cross into each spud, pinching the
bottoms so they open up, then grate the cheese and divide it between them,
stuffing it in well. Pick apart the gem lettuces, and serve each cheesy spud
with a good portion of chilli, some gem leaves and a dollop of yoghurt. 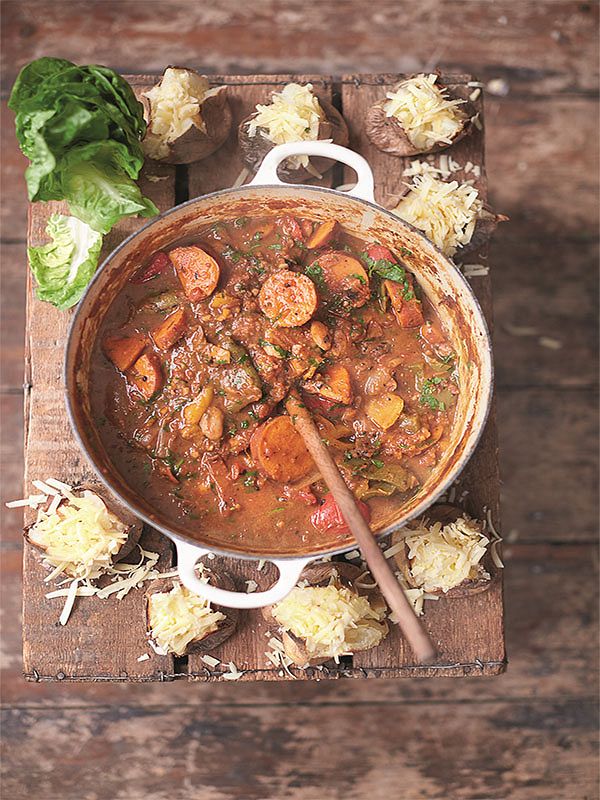