Take your baking back in time with this 18th century recipe for Savoy Cake. Baked in an ornate mould, it can be decorated to taste for a versatile and historic bake. A Savoy Cake is a fantastic dessert cake, originally from the Savoy region of France, which can be as simple or as elaborate as you wish. It is a fatless sponge baked in a moulded cake tin then filled and decorated with whipped cream and fresh fruit and topped off with a dusting of icing sugar. As long as you are careful with the preparation of your mould, there’s remarkably little work required to create something with real wow-factor.

Savoy Cake is just one of a variety of fatless sponge confections, including Naples Biscuit and Spanish Biscuit, which made their way to Britain during the 17th century. The original recipe was used to make sponge-finger biscuits; baking the recipe in larger, more ornate moulds only became popular in the early 18th century.

The original moulds were made of copper, and preparing them to ensure all cakes turned out without breaking must have been a stressful undertaking. The advice of John Simpson, the original author of this recipe, is just as relevant today as it was then: ‘Be very particular with the moulds, for there is as much art in preparing the mould, as in mixing the batter for the cake.’

Nowadays, of course, we have the advantage of non-stick tins and silicone moulds to make things a little easier. Careful preparation is still the key, though: clarified butter, caster sugar and cornflour making up the three ingredients that form the distinctive, biscuit-like crust on the outside. I prefer to use clarified butter because it easily coats all the little nooks and crannies in the mould and contains no milk solids, which might cook a little darker and blemish the outside of the cake.

This dessert cake is best enjoyed fresh, but even when it is past its best it can form the basis of other delicious desserts, such as Tipsy Cake and Trifle.

You will need: 1 decorative metal or silicone cake mould and an electric whisk.

First prepare the mould. If you need to clarify your butter, melt slightly more than the recipe requires (100g) in a small pan over a low heat. Skim the surface and pour off the clear butter, leaving the milk solids in the bottom of the pan. Generously coat the inside of your cake mould with the clarified butter, leaving no area uncovered. The central funnel is as important as the ornate sides. Tip out any excess and let the mould drain thoroughly. Add the caster sugar to the mould and shake it around, making sure the whole of the inside is coated. Tip out any excess.

Finally, add the cornflour and repeat as with the caster sugar. Set aside.

For the cake, add 200g of the sugar to the egg yolks and whisk until light and creamy. Stir in the lemon zest.

In another bowl, start whisking the egg whites with an electric whisk on a low speed.

Briskly mix one-third of the whipped egg whites with the creamed sugar and egg yolks to lighten the mixture. Don’t worry about being gentle at this stage, in effect you ‘sacrafice’ this portion of the egg whites so that it’s easier to fold in the remainder. Gently fold in the remaining egg whites.

Gradually sift in the flour in 3 or 4 batches, gently folding it into the mixture.

Pour the batter into the prepared tin. Don’t fill the mould completely as the mixture will rise during cooking. Having said this, don’t worry too much as any excess can easily be trimmed before serving.

Tap the filled tin on the work surface 2 or 3 times to ensure the mixture gets into all of the nooks and crannies and to dispel large air bubbles. Transfer to the oven and bake until well risen and an inserted skewer comes out clean. This will take quite a long time, probably longer than expected: my (silicone) cake mould holds just over 1.2 litres, and takes 1¼ hours to bake. Wait at least 40 minutes before checking the cake, and try not to keep opening the over door as this may cause the cake to sink and become heavy.

Once cooked, let the cake sit in the tin for 5 minutes then turn out on to a wire rack to cool. If you have been diligent with your preparation, it should just slip out of the mould.

Fill the middle of the cake with sweetened whipped cream, dust with icing sugar and drape with fresh berries.

Keep the cake for 3-4 days then use as a basis for a Tipsy Cake as follows: put the cake onto a serving dish and drizzle it with the alcohol of your choice (sweet wine, sweet or cream sherry, rum, brandy, or a mixture of all four!) until the cake is soaked and the liquid has begun to run out. Decorate the outside of the cake with flaked almonds, pushing them into the softened sponge. Fill the centre of the cake with a rich, thick, cold custard, pouring any extra around the base. Finally, add whipped cream on the top. 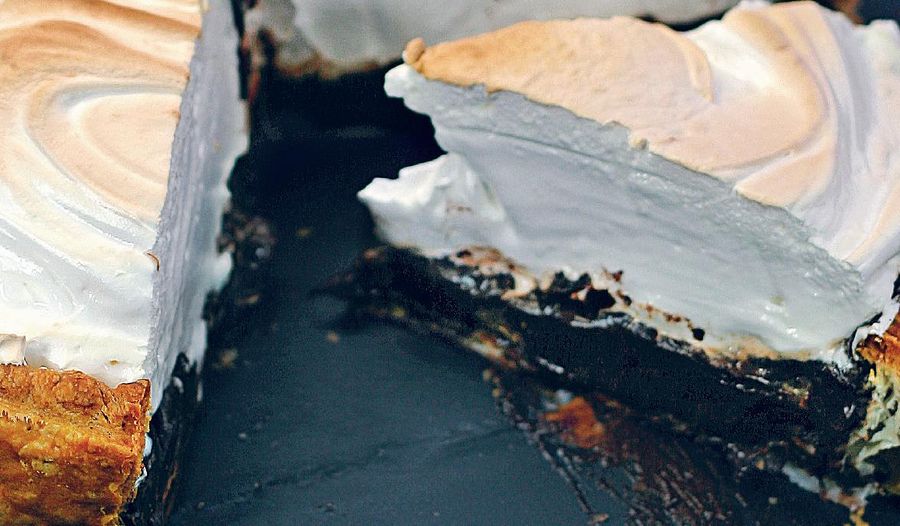