by Annabel Karmel from My Kitchen Table: 100 Family Meals From Annabel Karmel, this raspberry ripple cheesecake makes for a great dinner party dessert. The recipe is finished with fresh berries and white chocolate. This is a fabulously easy cheesecake, but do use the cream cheese at room temperature, or the gelatine will harden quickly and go lumpy.

You will need a 20cm (8in) round cake tin, and a food processor.

If using gelatine leaves, soak them in 150ml (5fl oz) water for 5 minutes, then remove, squeezing out excess water, and place in a bowl over a pan of simmering water for about 30 seconds, stirring until melted. Set aside to cool. If using powdered gelatine, put 3 tablespoons water into a small saucepan, sprinkle over the gelatine and leave to stand for 5 minutes. Put the pan over a low heat and stir gently for 1 minute until the gelatine has dissolved. Set aside to cool.

Melt the butter in a large pan and stir in the crushed biscuits. Spread the mixture over the base of a 20cm (8in) round cake tin, pressing it down, then place in the fridge.

Remove the cake tin from the fridge and spread half the cheesecake mixture over the base. Spoon half the raspberry coulis in blobs onto the cheesecake mix, then, using a skewer, swirl it through to make a ripple effect. Spoon the remaining cheesecake mixture on top and level the surface with a palette knife. Decorate the top of the cake by trailing lines of raspberry coulis from a teaspoon. Use a skewer to draw vertical lines through the coulis to create a pattern. Place in the fridge to set. Once set, arrange the berries on top. Melt the chocolate in a heatproof bowl over a pan of simmering water, then pour into a piping bag and pipe zig-zag lines of chocolate over the fruit. 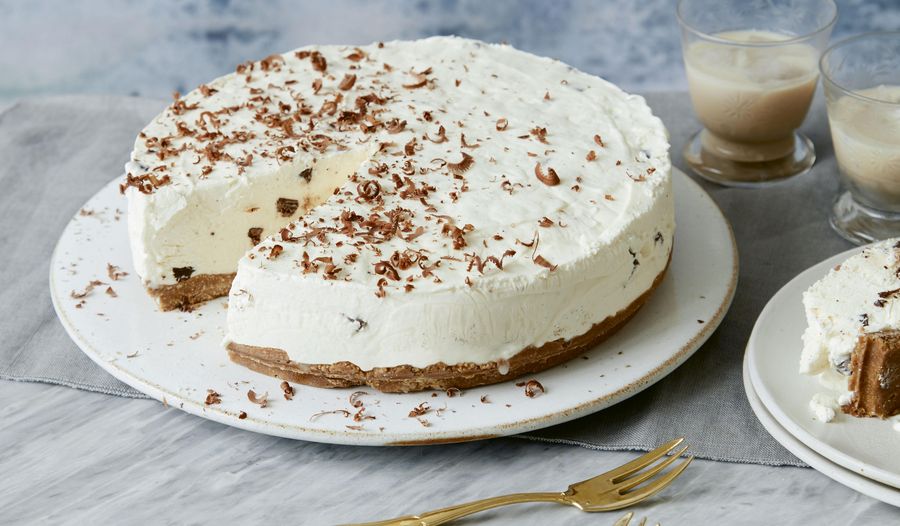 by Chris Bavin from Good Food by Nigella Lawson from How To Eat