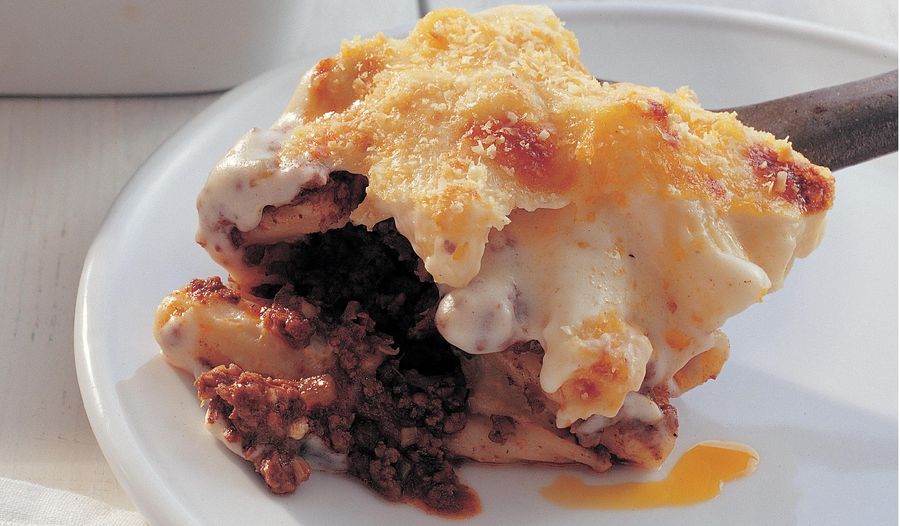 Patitsio is a baked beef and macaroni cheese pie from Greece. By Rick Stein, this recipe takes minced beef and blends with cinnamon, red wine and oregano. This is another recipe inspired by a visit to Rouvas restaurant in Corfu Town. I have a great affection for these Mediterranean baked dishes of meat, pasta, tomato and cheese, and in Corfu they give their version a unique quality with kefalotiri cheese and cinnamon. Kefalotiri is a dry, firm, ewe’s milk cheese, full of irregular holes, which ranges in colour from white through to pale yellow, depending on the grazing of the sheep. It is fresh and slightly sharp-tasting, with a distinct flavour of ewe’s milk. Just suppose you belong to a book club, and you need an all-in-one simple dish to feed everyone, because you know that with book clubs, you shouldn’t try too hard with the food. This is perfection: pastitsio, green salad, crusty bread and gutsy red wine. You will all then have the strength to discuss the latest Ian McEwan.

You will need a large, shallow ovenproof dish that measures about 23 x 33cm across and 7cm deep.

For the meat sauce, heat the olive oil in a medium-sized pan, add the onion, garlic and celery and fry until just beginning to brown. Add the minced beef and fry over a high heat for 3-4 minutes, breaking up any lumps with the wooden spoon as it browns. Add the red wine, tomatoes, tomato purée, cinnamon stick, ground cloves, dried and fresh oregano, bay leaves, 100ml water, 1½ teaspoons salt and some black pepper, and simmer for 30-40 minutes, stirring now and then, until the sauce has thickened but is still nicely moist. Remove and discard the cinnamon stick and bay leaves.

Bring 4.5 litres water to the boil in a large saucepan with 8 teaspoons salt. Add the pasta and cook until al dente – about 13 minutes, but take care not to overcook as it will cook a little further in the oven. Drain well, transfer to a large bowl and leave to cool slightly.

For the white sauce, melt the butter in a medium-sized non-stick saucepan, add the flour and cook, stirring, over a medium heat, for 1 minute. Gradually beat in the milk, then bring to the boil, stirring, lower the heat and leave to simmer for 5-7 minutes, stirring occasionally. Season with the nutmeg and some salt and pepper to taste.

Preheat the oven to 180°C/Gas Mark 4. Stir 250ml (about one-fifth) of the white sauce into the warm pasta with the beaten eggs and half the grated cheese. Keep the remaining sauce warm over a low heat, stirring now and then and adding more milk if it begins to get a little thick.

Use the melted butter to grease a large, shallow ovenproof dish that measures about 23 x 33 cm across and 7 cm deep. Spread one-third of the pasta over the base of the dish and cover with half the meat sauce. Add another third of the pasta and then the rest of the meat sauce, then cover with a final layer of pasta. Spoon over the remaining white sauce. Mix the remaining grated cheese with the breadcrumbs and sprinkle them over the top. Bake for 40 minutes until bubbling hot and golden brown.