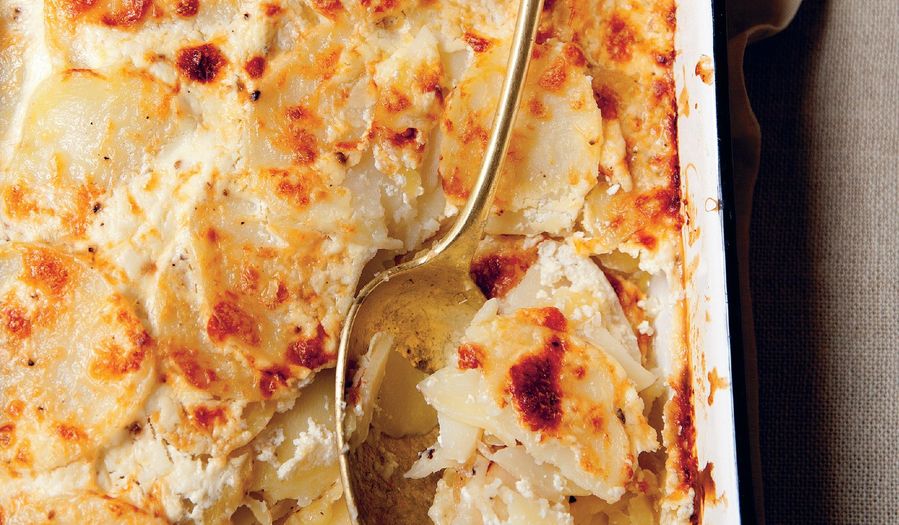 Enjoy this low fat alternative to the classic French side dish. This gratin potato dauphinois recipe has the same garlic and cheese flavours with fewer calories - magic. If there is one French recipe that always seems able to draw ecstatic sighs of pleasure and guilt from Brits, it’s this one. All that cheese and cream and butter is deliciously scandalous. I have re-jigged the method and taken out as much fat as I could without changing the sinfully gorgeous nature of this recipe. Welcome to guilt-free Gratin Dauphinois!

Using either a sharp knife or a mandoline, thinly slice the potatoes and add them to a large saucepan with the milk, garlic, bay leaves and nutmeg. It’s important not to let them sit out or they will go brown.

Bring the milk to the boil, reduce the heat and slowly simmer for 20 minutes. The potatoes will be softened but not quite cooked through.

Drain the potatoes and discard the bay leaves and garlic. You can either save the milk for a garlic-flavoured béchamel or throw it away.

Layer half the potatoes in an ovenproof dish and sprinkle half the cheese over. Cover it with the remaining sliced potatoes.

Spread the crème fraîche evenly over the top and sprinkle with the remaining cheese.

Place in the oven for 20 minutes, until the mixture is bubbling and the top is golden.

Poaching the potatoes in garlic and milk is a fantastic way of infusing them with flavour and giving them a rich texture without using very much fat. The little bit of cream and cheese that you add before putting the dish into the oven is then literally there for flavour. This method means the cheese and cream quantities are cut to well under half the amounts usually found in a traditional French Gratin Dauphinois recipe.