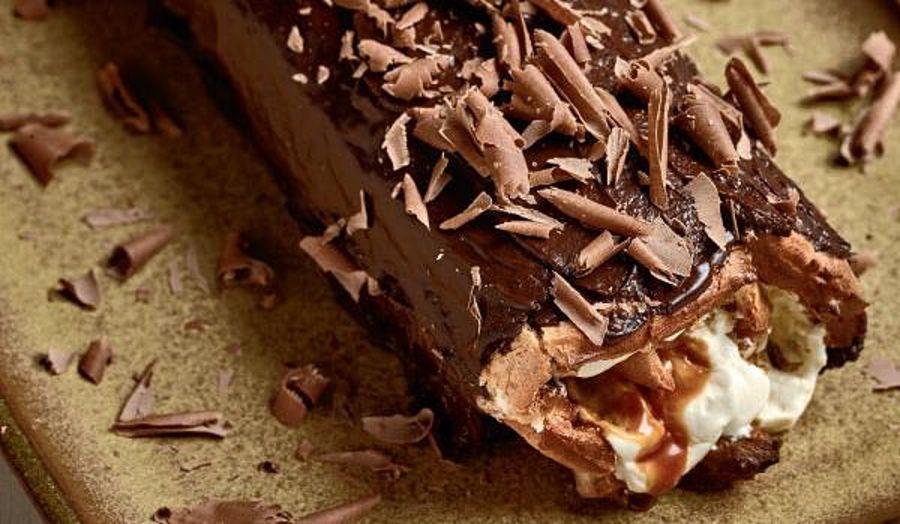 This irresistible recipe for Nadiya Hussain's Éclair Roll is a quick and simple dessert option that the whole family will love. There's plenty to go round, but it will all be gone in seconds! This recipe is for anyone who loves éclairs, but wishes they took less time to make. Of course, you could simply buy one from the shop and, believe me, when I need my fix I often do, and gobble it up before the kids can lay eyes on it. But for those who prefer their treats homemade, this is a safe place in between, offering all the great elements of an éclair – pastry, cream and chocolate – but with a little less work and time involved.

Preheat the oven to 200°C/180°C fan/gas mark 6. Lightly grease a baking tray and line it with baking paper. Put the water, butter, sugar and salt into a pan on a medium to high heat. Just barely bring to the boil, so the sugar and butter dissolve. Once they have dissolved, turn the heat down and drop the flour in quickly in one go. Stir straight away and keep going, to avoid any lumps. The mixture should look smooth and be coming away from the sides of the pan as you mix it.

Take off the heat. Add the eggs a little at a time, mixing after each addition. The mixture will look like it is separating, but keep mixing and it will come together. Keep going until all the eggs are used and the dough is smooth.

Pour the mixture into the centre of the prepared tray. Using an offset spatula or the back of a spoon, spread the mixture to a rectangle shape, roughly 20 x 30cm. Wet your fingers and pat down any peaks that may have formed, then pop it into the oven for 30 minutes.

To make the filling, whip the cream to soft peaks with the icing sugar and vanilla bean paste. For the ganache, chop the dark chocolate and put it into a bowl. Warm the cream in a small pan, being careful not to let it boil. As soon as it just begins to come up to the boil, take it off the heat and pour it on to the chocolate. Mix until the chocolate has melted completely.

Unroll the pastry and spread the cream all over. Drizzle over the salted caramel. Re-roll the pastry, starting from the shorter end as before (this time don’t wrap up the tea towel – tea towels are not tasty).

Put the roll on a serving plate and spread the ganache on top. Sprinkle over the shavings of milk chocolate and leave in the fridge when you are not eating it. If it makes it to the fridge at all, that is!