Chocolate Sunken Soufflé Cake from The Violet Bakery Cookbook by Claire Ptak. This rich and utterly chocolatey cake is perfect for a dinner party dessert or date night. It's flourless, so makes for a dense and delicious dessert. 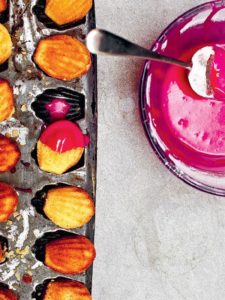 I used to call this a flourless chocolate cake in the early days of my cake stall, and it was so funny to hear people ask for the 'flavourless' chocolate cake; however, Sunken Soufflé Cake describes it better. It's a soufflé, made rich with dark chocolate, and when baked just right is super-rich and gooey but then just melts in your mouth and actually feels quite light. These types of flourless cakes were really popular in restaurants in the 1980s and 1990s, but today people tend to add lots of nuts to their chocolate cakes. I love a nutty chocolate cake but a pure chocolate cake is so lovely.

NOTE: You need to use an electric mixer to get the right volume with this cake.

You will need an electric mixer and a 23cm loose-bottomed cake tin.

3. Separate the eggs, placing the yolks into the bowl of your electric mixer first. Add half of the caster sugar and whisk until the mixture forms pale and fluffy ribbons and has doubled in volume. Remove the bowl of melted chocolate from the pan of hot water and set it on your worktop. Fold the whisked yolks into the melted chocolate. The should be marbly and not fully incorporated.

4. Wash out the mixer bowl and dry it thoroughly, and now add the egg whites to it along with the remaining sugar. Whisk on a high speed until medium-soft peaks form. Do not overwhip. The consistency of the egg whites should resemble that of the yolk and chocolate mixture. Fold the whites into the chocolate until just mixed, then pour into your prepared pan.

5. Bake for 30 to 40 minutes, until the top of the cake is puffed and just starting to crack. The cake will still have a bit of a wobble and will be puffing out over the top of the pan. Place the pan on a wire cooling rack and coax any extra overflowing cake back into the pan. Allow to cool for a good 20 minutes, then remove the sides of the pan, peel off the paper, and slide the cake onto a nice serving plate. Dust with cocoa powder before serving. From the book: The Violet Bakery Cookbook