This is a subtly textured, richly flavoured arrangement of toasted pieces of flatbread topped with meaty aubergine and beef, a garlicky tahini-yogurt sauce, red pepper flakes, pomegranate seeds, toasted pine nuts and fresh shredded mint. Is it too terrible to say that I think of it as Middle-Eastern nachos?

1. Preheat the oven to 200°C/180°C Fan. Spread the pitta triangles out onto a large baking sheet and toast for 10–15 minutes, or until they are crisp. You don’t need them to colour, but if they do just a little here and there, that’s not a bad thing. Set the pitta triangles aside for the moment.

2. Beat the yogurt, tahini, lemon juice, garlic and 1 teaspoon of sea salt flakes together in a heatproof bowl that will later sit over a saucepan. Taste to see if you want any more salt. Put to one side while you cook the aubergine-beef layer.

3. Warm the oil in a wide, though not deep, heavy-based saucepan or casserole and cook the onion, stirring occasionally, over a mediumlow heat for 5 minutes, then turn the heat down to low and carry on cooking it, still stirring occasionally, until soft and a pale caramel colour. This will take another 4 minutes or so.

4. Turn the heat up to medium, tumble in the aubergine cubes and stir well to mix with the onion. Stay by the hob as you will need to stir frequently, and cook them for about 10 minutes. Turn the heat down if they look as if they’re catching.

5. Stir in the cumin, coriander and a teaspoon each of Aleppo pepper and sea salt flakes and, now over a high heat, add the mince and use a fork to break it up a little and turn in the pan until it’s lost its red colour. Turn the heat back down to medium and cook for 10 minutes, stirring occasionally, until the meat is cooked through. Taste to see if you want to add more salt, then take off the heat while you return to the tahini-yogurt sauce.

6. Pour some just-boiled water into a fresh pan, enough to come about 3cm up the sides, and put over a low heat. Sit the bowl with the tahini-yogurt mixture on top, making sure the bowl does not touch the water. Beat well until the yogurt is slightly above room temperature and has the consistency of lightly whipped cream.

7. Now for the grand assembly: arrange the crisp pitta triangles on a large round plate (I use one of about 32cm in diameter). Top with the aubergine-beef mixture, followed by the yogurt-tahini sauce. Sprinkle with the Aleppo pepper (or paprika, if you’re using that) to give a light dusting. Scatter over the pomegranate seeds and toasted pine nuts and, finally, strew with the finely shredded mint leaves. Eat with your fingers, nacho-style.

More Recipes from At My Table Chicken with Red Grapes and Marsala 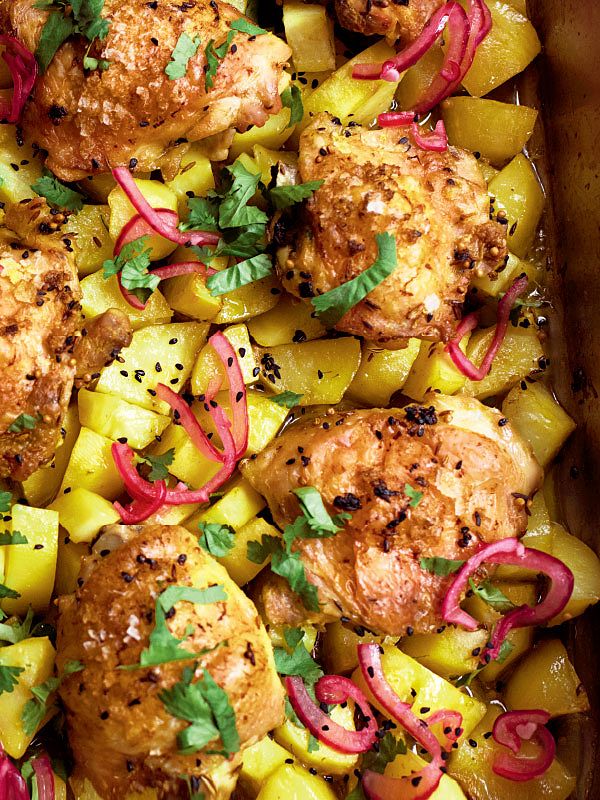