Make this recipe from Eat Well For Less for a lighter take on this classic crowd-pleasing recipe that uses turkey instead of beef. Minced turkey can be made from either breast or thigh meat – if you want to keep the fat down, go for minced turkey breast. Here, instead of making a white sauce, Parmesan cheese is mixed with fat-free quark, making this a simple lasagne to prepare. To top this off, toasted bread is blitzed to make some crispy breadcrumbs, but stale bread works equally well.

1 Heat a large, deep-sided sauté pan or flameproof casserole dish over a medium heat. Add the olive oil and minced turkey and fry for 3–4 minutes until browned all over, stirring regularly.

2 Meanwhile, tip the onions, carrots and garlic into a foodprocessor and pulse until roughly chopped (or roughly chop them by hand). Add them to the pan and cook over a medium heat for 5 minutes. You want them to soften but not colour, so it’s a good idea to put a lid on the pan to help retain the moisture and steam the vegetables at the same time.

3 Add the oregano and thyme and cook for another minute, then add the tomato purée and turn the heat up, stirring it through all the vegetables.

4 Crumble in the stock cubes or add the stock pots, then tip in the tomatoes. Fill both the empty tomato tins with water, swirl around and add to the pan, then stir well and bring to the boil. Turn the heat down to a simmer and cook for 10 minutes until the turkey is tender and the sauce is reduced slightly.

5 Stir in the chopped basil and frozen spinach and heat through for another 5 minutes, stirring occasionally. Meanwhile, toast the bread in a toaster, then set aside to cool.

7 Tip the quark into a bowl, add the grated Parmesan and plenty of black pepper and mix together really well.

9 Blitz the toasted bread in a blender or food-processor to form crumbs, then scatter over the top of the assembled lasagne. Cover with foil and bake in the oven for 30 minutes then uncover and cook for a further 15 minutes until golden brown and bubbling.

10 Remove the lasagne from the oven and leave to stand for 5 minutes while you cook the peas. Bring a saucepan of water to the boil, add the frozen peas and cook for 2–3 minutes until hot through, then drain. Cut the lasagne into portions and serve with the peas alongside. 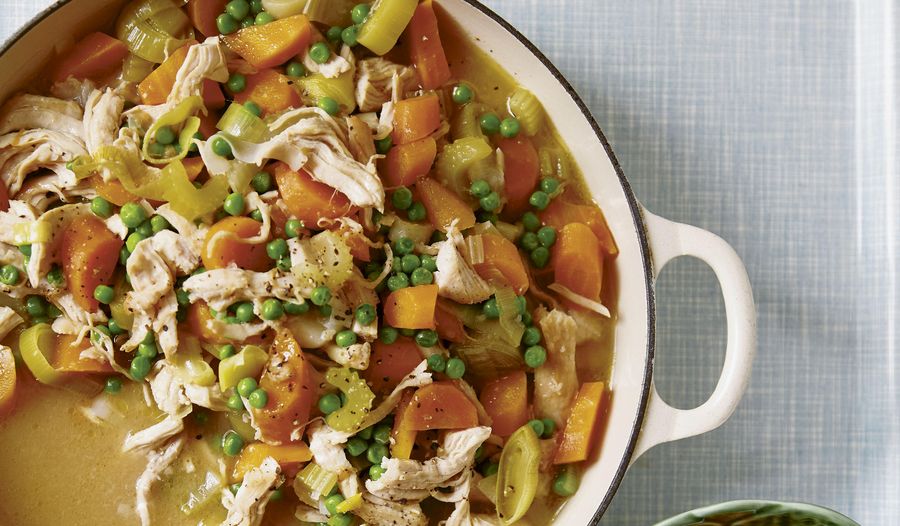 More Recipes from Eat Well For Less: Every Day From the book: Eat Well For Less: Every Day