by Elly Pear from Green: Veggie And Vegan Meals For No-Fuss Weeks And Relaxed Weekends For an indulgent, plant-based dessert, try this chocolate mousse recipe from Elly Pear; it's made with aquafaba instead of egg whites for a celestially light texture. Let me tell you about aquafaba. If you’re unfamiliar with this wonder ingredient, it’s the liquid found in a tin of chickpeas – the water they’ve been cooked in. Over the past few years, vegans have experimented relentlessly with aquafaba, sharing their findings on blogs and forums. The discovery that this liquid can be (very successfully) whipped up to emulate egg whites in recipes including meringues and mousses was a eureka moment. Not only is it vegan-friendly, but aquafaba is something that would usually get poured away. Reducing waste while making chocolate mousse – you’re a hero!

To answer the questions I am asked most often about aquafaba: no, it doesn’t taste of chickpeas; yes, it will go brilliant white, not beige; like egg whites, it grows hugely when whipped and so a single tin will make enough mousse to serve about 10 people. What a bargain!

Chickpeas freeze well, so if you’re opening a tin especially to make this chocolate mousse, tip the pulses into a freezer-safe container and store them until you need them. They can be added to a soup, stew or curry from frozen.

It takes a lot longer to whip up aquafaba than egg whites, so be patient. You definitely need an electric stand mixer for this recipe. It’ll take about 15 minutes of whisking on high speed to get them as stiff as they need to be.

First, make sure that your mixing bowl and whisk are both free from any grease. Wash them both in hot soapy water and dry them with a clean tea towel before starting this recipe.

Strain the aquafaba through a fine sieve into the bowl of an electric stand mixer bowl and add the vinegar. Whisk the aquafaba on a medium to high setting and, when it starts to foam (after about 30 seconds), slowly add the sugar. Once all the sugar has been added, turn the mixer up to its highest setting and whisk to stiff peaks. Be patient, it’ll take about 15 minutes. Unlike egg whites, you cannot ‘over-whip’ aquafaba, so keep going until the peaks are really stiff.

While the aquafaba is whisking, break the chocolate into small pieces and put in a heatproof bowl set over a pan of simmering water, making sure the base of the bowl does not touch the surface of the water. Resisting the urge to stir, heat the chocolate until all the pieces have completely melted. Once melted, take the chocolate off the heat, transfer to a large mixing bowl and leave to cool for 5 minutes. When it is room temperature and the bowl is cool to the touch, add the milk and stir through with a spatula until smooth. It is essential that you let it cool down properly or, when you add the aquafaba, the chocolate will ‘seize’ and you’ll end up with a grainy mousse. Yuk.

Using a large metal spoon, fold 2 big spoonfuls of the whipped aquafaba into the melted chocolate. Now carefully fold the chocolate into the rest of the aquafaba, making sure you hold onto as much of the volume as possible.

Divide the chocolate mousse between 8–10 serving glasses or ramekins. Chill the mousse in the fridge for at least an hour before serving. To serve, sprinkle over the sea salt flakes if preferred. 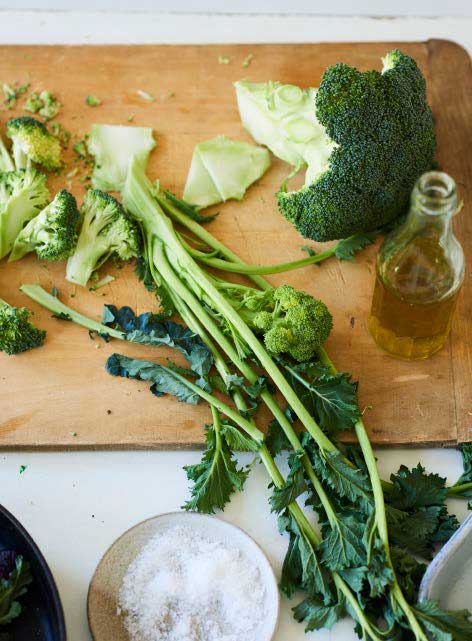 From the book: Green: Veggie And Vegan Meals For No-Fuss Weeks And Relaxed Weekends