Cook from the book: The Cook You Want to Be by Andy Baraghani

Andy Baraghani is the mastermind behind many of US-based food publication Bon Appetit’s most popular dishes. The professional chef and recipe developer is known for his minimum fuss recipes that taste and look the part, and for re-working familiar recipes in unexpected ways. In his debut cookbook, Andy sets out over 120 truly distinctive recipes, all created according to this rigorously fuss-free, flavour-focussed ethos. ‘I crave simple, delicious cooking rather than dishes that are overly complicated’, writes Andy, and that’s just what The Cook You Want To Be is all about. With plenty of Iranian recipes in the mix, it’s also a love letter to Andy’s Iranian heritage and includes definitive guides to making the likes of tahdig, kuku sabzi and kufteh. 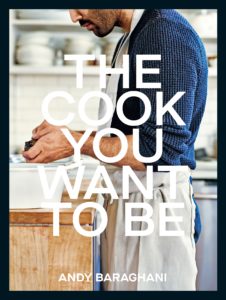 The Cook You Want To Be

As avid fans of Andy’s style of cooking, The Happy Foodie team was keen to start testing recipes from the book. Here’s how we got on making everything from an eat-with-everything cucumber salad to the best meal one participant has ever made for her partner.

What I made: Eat With Everything Cucumber Salad

What I thought: Thinking about this dish makes my mouth water. I have made this multiple times just on its own as a lunch or snack – it is so moreish! The dressing makes the humble cucumber an absolute star. It’s so easy and quick too – I love when recipes are simple but also have the WOW factor.

What I made: Fall-apart Caramelised Cabbage Smothered in Anchovies and Dill

What I thought: It was a delicious recipe – very tasty but also achievable and budget-friendly. This is perfect for winter dinners when you want to cook seasonally but are looking to give an edge to (sometimes uninspiring) winter veg! I found it fresh, hearty and zingy – all qualities I love in a dish. I believe it could also work really well as a delightful companion to a meat or veg roast for a weekend meal. I will also be sure to re-use the lemon, anchovy and dill dressing for other dishes like baked white fish.

What I made: Spicy Coconut Chowder with Toasted Garlic

What I thought: I was super excited to try this recipe as the title immediately jumped out at me and I’m so glad that it did not disappoint. The soup was the perfect balance of creamy, warming and filling. The beautiful South-East Asian flavours made it so aromatic whilst cooking and the garlic chilli oil gave it some heat that lifted the flavour. It was also super easy to follow (which I love in a recipe) with the hardest part being the peeling of the garlic. Overall a tasty dish with plenty of room to experiment – I expected no less from the amazing Andy Baraghani!

What I made:  Tangy Pomegranate Chicken

What I thought: I’m always a bit nervous about making new dishes as midweek meals, the fear of being up all night unexpectedly marinating something is real! I needn’t have worried though, making this recipe was so simple and stress-free and the prep was surprisingly quick. My partner has also described it as ‘the best meal I’ve ever made him’, which I think says it all! I’m definitely going to be making this again.

What I made: Buttery Beef and Peanut Stir-Fry

What I thought: Like Andy, I too often get intense cravings for stir-fry. So as soon as I saw this recipe I jumped at the chance to add a new dish to my regular rotation. While I might be somewhat of a stir-fry connoisseur this was my first time making one with leeks. These leeks gave the meal a sweet onion flavour and I loved the fact that the butter-lemon sauce got trapped between its layers so it became juicy. I marinated the beef for a few hours as suggested and the brown sugar caramelised the strips beautifully in the pan. I also opted to serve with jasmine rice. All in all, this was a very speedy meal which, even more importantly, required very little washing up.

What I made: Caramelised Sweet Potatoes with Browned Butter Harissa

What I thought: This dish tasted SO good. It was also really easy to make. The harissa adds lots of flavour and taking the time to roast the sweet potatoes for a good half hour meant they came together in spicy, sweet deliciousness. While it was low effort to make, my friend who I was cooking for was very impressed!

What I made: Sticky, Spicy Basil Shrimp

What I thought: This was exactly what it said on the tin – sticky, spicy, basily and delicious! I thought this was going to be a lot more complicated than it was, but it was so super simple and only took around 20 mins from start to finish. I felt like a ‘real’ chef when I served this up to my housemates, who all licked their plates clean. Definitely a quick and easy prawn recipe for my meal plan repertoire!

What I made: Big Shells with Spicy Lamb Sausage and Pistachios

What I thought: This felt like a treat of a meal, but one that was completely achievable on a weeknight, so it really was the best of both worlds. I wasn’t able to find jumbo pasta shells, so instead used big rigatoni, which I would really recommend if you can’t find the shells – the rigatoni still allowed you to hold quite a lot of the delicious lamb and broccoli rabe mixture. I really like how Andy recommends how to spice your lamb mince, which meant I could do it a little bit for my own taste and just great to have an alternative when shopping for the ingredients. It was quick but indulgent and the return of the quite small investment of time needed to make the dish makes this a meal I will definitely be cooking again. This is a meal that does live up to the promise of “Everyday recipes to impress”!

What I made: Salt and Pepper Cod with Turmeric Noodles

What I thought: This was unlike anything I’ve made before, the salty, crispy cod worked so well with the fresh herbs and a bit of a kick from the chilli dressing. Also, cooking noodles in a bit of turmeric and butter is inspired! This was also surprisingly quick to pull together which I’m always grateful for on a weeknight. I’ll definitely be making this again!

What I made: Spicy Cauliflower Ragu with Lemony Breadcrumbs

What I thought: This was a really delicious take on a ragu and makes absolutely HEAPS (I had already served some out before taking this picture). So yummy and can be kept quite cheap as well. The lemony breadcrumbs are particularly special.