An A-Z of Pasta with Rachel Roddy: Trofie with Pesto alla Genovese, Potatoes and Green Beans Twist, tadpole, spindle, piglet tail, the piece of paper you had been rolling between your fingers all through double maths – just some of the things that come up when you ask people to describe the star of this month’s column, trofie, children being more imaginative than adults. Spindle is probably the most common descriptor of trofie, the one that best helps us picture the short, twisted, flour and water shape with tapered ends.

Typical of Liguria, the region that snakes up the coast from Tuscany to the border of France and Provence, and Liguria’s capital Genoa, trofie descend from the medieval gnocco. It is another shape born of necessity and made from whatever was available: poor flours, bran, chestnut flour, bread soaked in water, or cooked potatoes kneaded into a dough. The origin of the name is unclear – some scholars remark it is from the Greek for nourishment, others that it comes from the verb strufuggiâ, ‘to rub’, which in turn comes from the Greek, to spin. Trofie with a proportion of potato can be dated to the 1800s, when the starchy migrant from the new world rooted itself in the soil and edible culture of Liguria. By the twentieth century trofie was a codified shape made fresh at home, sometimes including potato, bread or chestnuts, also factory-made, so with hard wheat and water, which as we know can be equal to fresh, only different. If you want to try your hand at making trofie, make a dough of 300g of 00 flour and 150ml of hot water, work into a ball, knead and rest. Then take a handful of dough, and with the other hand pinch off a pea-sized lump and use the hollow of your palm to roll it back and forth against the board, until it resembles a 2cm slug. Now roll your palm up and over it again, then pause and roll your palm back down at a slant, therefore dragging and hopefully twisting the dough under the edge of your hand so as to form a spindle.

Whether you choose to make your own or buy dried, we’re going to serve our trofie with pesto alla genovese, another of Genoa’s prized culinary offerings. The incredible thing about pesto alla genovese is how insistent the smell is, burrowing, how it roars once again when it is mixed with the hot pasta. Genovesi are proud of their basil, particularly that grown on the fringes of the city in a quarter called Pra’. Its pale green leaves are small and tender enough to smudge between two fingers if you press hard enough, their scent like cinnamon, grass and sweet green tea, but without the head-girl mintyness that comes with ruffled leaves of Neapolitan or lettuce basil.

The addition of potatoes and green beans is traditional and wonderful. Some recipes suggest cooking things separately. I prefer a cooking stagger, so adding the potatoes to the boiling water first as they take 15 minutes, adding the beans after 2 minutes as they take 12, then adding the trofie 3 minutes later as they take 10 minutes. The idea being that everything is cooked at the same time (if the potato is a bit soft, all the better). I then toss all three with the pesto and a little extra cooking water if it needs loosening. The potato acts as a starchy binder. A glorious dish, also one to remember for a crowd.

a pinch of salt

For the rest of the dish:

First, make the pesto in either a pestle and mortar or a food processor.

In a pestle and mortar: Put the garlic, pine nuts and a few grains of coarse salt in the mortar and pound with the pestle, until they are reduced to a rough paste. Add half the basil and pound until it is crushed, then add the rest and pound again – either a firm push and twist or a wider rotating movement, until the basil is a paste. Add the cheese and mix, then add the oil and mix again.

In a food processor: Pulse the garlic, pine nuts and a few grains of salt into a rough paste. Add the basil and a little oil and pulse again, and then the rest of the oil. Scrape into a bowl and stir the cheese in with a spoon.

Bring a large pan of water to the boil, add salt, and stir. Add the potatoes first, then after 2 minutes the beans and then, in accordance with cooking time, the pasta.

Meanwhile scrape the pesto into a large, warm bowl and loosen with a spoonful of cooking water. When the pasta, potatoes and beans are cooked, drain and save the water or lift directly into the pesto bowl and toss, adding a little more cooking water if it seems stiff. Serve immediately. 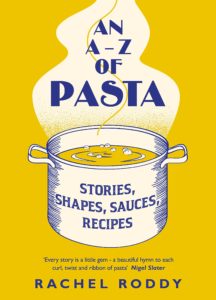 Capelli d’Angelo with Prawns and Lemon