Getting to know Noor Murad, the co-author of Ottolenghi Test Kitchen: Shelf Love A new Ottolenghi book is always a big moment for food lovers, but Ottolenghi Test Kitchen: Shelf Love is an especially exciting prospect. The first in a new series of books from the Ottolenghi Test Kitchen, Shelf Love will teach you how to cook intuitively, make the most of your store cupboard, and put an Ottolenghi standard meal on the table any night of the week. To delve a little more deeply into the book, we sat down with Noor Murad, lead member of the Test Kitchen team and co-author of Shelf Love. 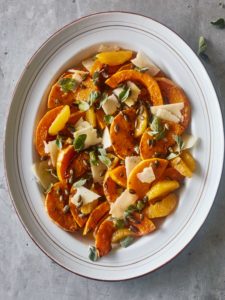 A collaborative effort from the Ottolenghi Test Kitchen team Designed to help you make the most of your pantry, fridge, and freezer 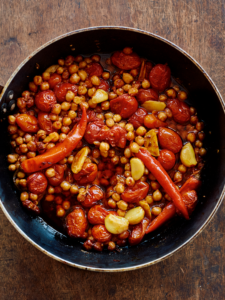 With recipes ranging from one-pot feasts to sumptuous bakes

I’d like to start by touching on your background as a chef. I know you trained in New York – can you talk me through that?

Well, I got my first job when I was 16 in Bahrain. I told my dad I wanted to be a chef and he was incredulous. He was like: “ok well I’m going to get you a summer job and you’re going to hate it”. And I ended up loving it – it was complete chaos and I loved it. And then after high school, I stayed in Bahrain and worked for a German catering company for about 7 months. We worked at the Formula 1 track and would cater all the races, which was very cool. I was the only Bahraini chef there, everyone else was German. They actually sent me to Germany for a short spell to work there – I don’t speak a word of German so that was interesting! Then I went to New York and I studied at the CIA (the Culinary Institute of America – not the other CIA). And it was a really tough degree, it was a three-year bachelor’s degree in culinary management, so the first two years were all kitchen-focussed and then the rest of the time was all about restaurant operations, accounting, food writing, and everything to do with that side of the industry. Then I did my internship in Hawaii for 6 months and after that, I worked in Manhattan for a year. I had been a very shy girl who grew up on this tiny island; New York really helped bring out my personality because I was surrounded by these strong and opinionated Americans, which was something I’d never encountered before. So it definitely helped build my personality, which I think in turn shaped me as a chef.

I read a piece by Yotam over the summer in the New York Times, in which he described you as ‘Bahrain-made, New York-trained”. How does your Bahraini identity make its presence felt in your recipes?

I think my Bahraini identity is probably the strongest presence in what I do. I grew up there – my dad is Bahraini and my mum is English. I think I had a bit of food envy growing up because mum was always making shepherd’s pies and spag bol and I was like: “how come we don’t get to eat what all the other kids are eating?” My favourite thing was when my dad would take us out to the food markets and all these little alleyways and hole-in-the-wall places, because then I got to eat Bahraini food, Bahraini street food, and I loved it so much. But I think as I got older I also grew to appreciate the kind of food mum made, so I almost combined the two.

That’s interesting because my next question was going to be about British cuisine. Obviously, you’re in the UK now – is there anything in particular that you really love about the UK food scene?

It’s interesting because London is almost a world in itself within the UK – it’s so multicultural. But I really do love how so many restaurants here focus on seasonality, locally sourced ingredients, and local suppliers. Bahrain’s a desert island and a lot of the stuff we have is imported. So the fact that here you can source so much locally and support your local butcher and your local bread shop – I really like that about the UK food scene.

Moving on to the book, I think it would be great for our readers to get a sense of the concept behind Shelf Love. What were you aiming to do with this book, and was the writing process different from other Ottolenghi books you’ve worked on?

In my time with Ottolenghi I’ve worked on two other books. I developed recipes for Falastin by Sami Tamimi and Tara Wigley and then also pitched recipes for Ottolenghi FLAVOUR, so I had seen how a book comes together, but had never actually written one myself. Yotam and I had always talked about creating a series of books from the Ottolenghi Test Kitchen. The pandemic was something none of us saw coming but it also kind of provided the narrative we needed for Shelf Love. I don’t want to say that Shelf Love is a lockdown book, it absolutely is not – I think it teaches you a timeless skill which is how to be creative with what you have. But the lockdown definitely shaped our language around recipes and the level of flexibility with which we present them. It encouraged us to make recipes more inclusive, to say: “hey, if you don’t have a particular ingredient, don’t sweat it, maybe you have something else you could use instead”. It’s very approachable. And we made it very visual too, because at the beginning of lockdown we were sharing lots of stories on Instagram and giving people step-by-step guides to our recipes and we found that a picture says a lot more than words. People are visual learners and Shelf Love is very picture-heavy because of that.

There’s an emphasis throughout the book, and especially in the ‘Fridge Raid’ chapter, on comfort food. I’m curious as to what that phrase, “comfort food”, means to you.

Comfort food is anything shareable. For me, it almost always has some kind of Middle Eastern twist and it’s something that you make in a big batch to share with people, with your loved ones. That’s where I find comfort. So something like the chicken and Parmesan soup from Shelf Love, that’s a very comforting dish. Every culture has its own version of chicken soup – this one is a bit different because it uses grated tomatoes in the base, which I always had in soups growing up. Some people think: “how could you put tomatoes in a chicken soup?” But it adds a lot of body to it, and it’s got Parmesan rinds and it’s just something you’d make in a big pot and share with everyone. For me that is the definition of comfort.

Do you have any favourites from the book, recipe wise? Is there a recipe you’re especially proud of?

There are two recipes that I really love. The first one is the sesame-crusted feta with black lime and honey syrup. We use a lot of black limes in Bahrain and for me it’s not an unusual ingredient, it’s something I use liberally all the time. I realised moving to London that it’s not really something people use very often. We throw it into soups, stews, rice, and it adds this subtle bitterness, which is quite welcome in heavier dishes. There are a few recipes in Ottolenghi FLAVOUR that you can tell are “Noor recipes” because they have black lime in them. And I felt like in this book I really wanted to give them the attention they deserved. I think people could be put off using black limes because they’re quite bitter, but in this recipe they’re paired with fresh lemon and honey which really balances out the bitterness and goes so well with the baked, melty feta.

My other favourite is the tamarind greens and mung beans. One of my best friends from childhood is Persian and I used to spend a lot of time with her mum in her kitchen because I was so enamoured with Persian food. Bahrain was part of Persia many years ago, so there’s a huge Persian influence on Bahraini food. Bahraini food is quite unique because it’s a mix of Persian, Indian, and Middle Eastern. We love sour, bitter things, and lots of herbs, and that’s definitely from the Irani side. The mung bean dish was something my best friend’s mum would make for us growing up and it’s such a simple dish. Her dad would call it “poor man’s food”. But I loved it, it’s such a great, filling vegan main – I told him: “I’m going to make a recipe out of this.”

The OTK is clearly a really creative and collaborative working environment. How has your cooking been influenced by Yotam and the other members of the OTK?

I feel so lucky to work in this team. I always say we’re like the Test Kitchen Avengers, we all have a different superpower that we bring to the table. You have Tara who is a wizard with words. I’ve always loved food writing but Tara really helped me to build my confidence. Then Verena is like a pastry wizard. She’ll tell me the science behind why something went completely wrong and turned into a cookie volcano or something. I learn so much from her. Chaya is the newest member of the team and what’s great about working with her is that there are so many surprising similarities in our cultures. I wouldn’t have thought that Mauritian cuisine would have a take on something I ate growing up, but lots of the dishes are really similar. And then obviously Yotam is an inspiration to us all. He just has a way with food! And it’s not only the people in the Test Kitchen, it’s everyone throughout the company, it’s such a diverse group of people and everyone contributes their own unique style.

I think our audience would probably really like to know what we can expect from the Test Kitchen going forward. Are there more books on the horizon or are you working on any other projects at the moment?

Shelf Love is the first in a series of OTK books. We’re working on the second one now, which hopefully is going to come out next autumn. Then we’re also doing our YouTube channel which is something new and exciting for all of us. We want the channel to support Shelf Love, but we also want it to be a permanent fixture for the Test Kitchen. Hopefully people watching can gain insight into what we do and we can interact with them and get people cooking our food, which is really what we want in the end.